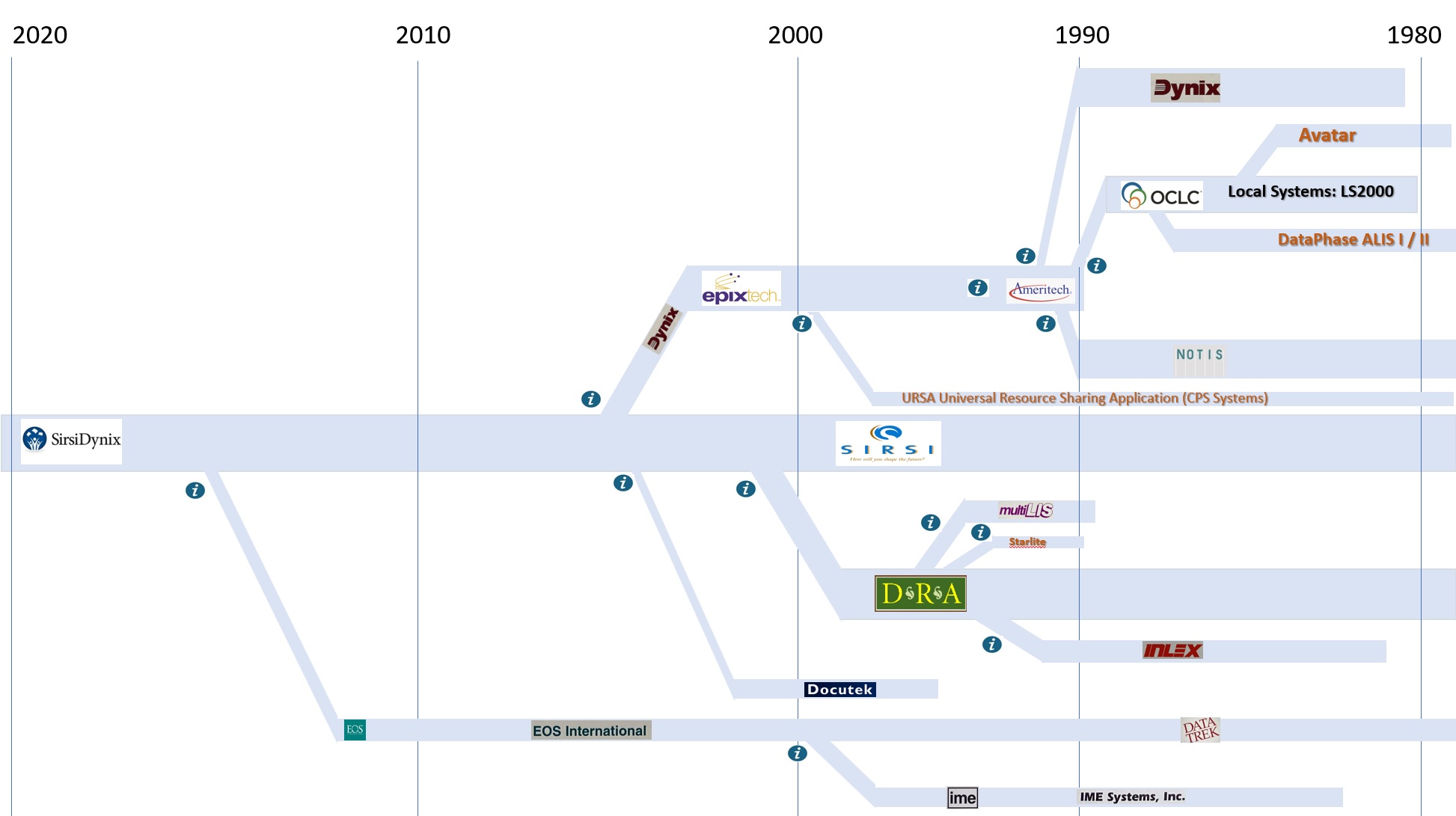 Breeding, Marshall. ICV Partners acquires SirsiDynix. February 2015. Smart Libraries Newsletter. A new era in the corporate history of SirsiDynix, one of the corporate giants of the library technology industry, has begun. After over eight years of ownership, Vista Equity Partners has sold SirsiDynix to ICV Partners, with Vista retaining and company executives acquiring minority stakes in the company. While it is too early to assess how new investment owners will shape the direction of the company going forward, it is clear that SirsiDynix remains a major force in the industry with a very large number of libraries relying on its success. SirsiDynix, along with other Ex Libris, Innovative Interfaces, and Follett Corporation, ranks as a giant in the industry, which also includes dozens, if not hundreds, of mid-sized and small companies. Each of these four companies has earnings in the range of $100 million, develops strategic technology products for libraries, though each follows quite different business strategies and has distinct profiles of customers according to type and geographic region. Globally diverse, SirsiDynix supports customers in over 70 countries. SirsiDynix has a long and interesting history that spans many different companies, products, and personalities. This issue of SLN, examines SirsiDynix, working through the phases of its corporate history, its product strategies, and the potential impact of this business transition.

Breeding, Marshall. SirsiDynix Acquires EOS International. December 2013. Smart Libraries Newsletter. SirsiDynix has acquired EOS International from its cofounder and Chief Executive Officer Scot Cheatham effective November 1, 2013. The transaction was conducted entirely from financial resources within SirsiDynix without additional backing from its private equity owner, Vista Equity Partners. The acquisition of EOS International will expand the presence of SirsiDynix in the small library arena, and will strengthen its overall position in terms of revenue, customers served, and product offer ings. SirsiDynix provides a stable and expansive business environment for the ongoing support, development and marketing of EOS International products.

Breeding, Marshall. SirsiDynix Development Strategies. June 2012. Smart Libraries Newsletter. In recent years, SirsiDynix has been executing a development agenda that provides libraries with tools and interfaces to improve access to their collections and services. The company continues to make improvements in the functionality of its strategic integrated library systems, Symphony and Horizon, concentrating especially on the development of patron-facing tools. These interface products address the different methods with which patrons might want to access the library: BookMyne and BookMyne+ for iOS and Android based mobile devices, Enterprise and Portfolio for the Web, and the Social Library for Facebook. SirsiDynix has also launched eResource Central for access and management of e-books, complementing the capabilities of its Symphony and Horizon ILS products in managing a library's print collection.

Breeding, Marshall. SirsiDynix Evolution: Recent Developments in the Context of Broad Corporate Strategies. July 2010. Smart Libraries Newsletter. SirsiDynix has taken a number of actions that consolidate and focus its corporate resources. On May 12, 2010, SirsiDynix launched a new Web site and announced a number of major changes related to its operating facilities and its organizational approach to customer service. These moves represent incremental steps toward a number of longstanding business goals. The company positions its moves as offering significant benefits to the libraries that use its products through improved communications channels and more sensitivity to the individual needs of each customer. As a company that serves something over 20,000 library facilities spanning over 70 countries worldwide, these adjustments will have a broad impact.

Breeding, Marshall. Developments at SirsiDynix. February 2010. Smart Libraries Newsletter. SirsiDynix, one of the largest library automation companies, made a number of recent announcements relating to both its products and personnel. December 2009 saw the release of new versions of its major products and the departure of a key executive.

Breeding, Marshall. Two major lawsuits jolt library automation industry. December 2009. Smart Libraries Newsletter. In recent months, two major lawsuits have been filed in the the library automationindustry. Queens Borough Public Library filed a complaint on July 2, 2009 against SirsiDynix for breach of contract and 3M has filed suit against EnvisionWare for patent infringement. Both of these lawsuits address interesting issues that bring pivotal libraryautomation legal concerns to the surface. Neither accusation has been proven, and both are still pending legal action or settlement. The complaints filed with the courts stand as public documents exposing the plaintiffs’ concerns in detail. The defendant’s response to those claims may not become public until the issue comes before a court, or may never be disclosed if the parties settle out of court. While major lawsuits attract much attention, they must be considered skeptically until both sides of the matter can be understood.

Breeding, Marshall. Composing a Symphony. November 2007. Smart Libraries Newsletter. SirsiDynix has rebranded Unicorn, their strategic ILS product as Symphony. The company indicates that the initial release of the product will be called Symphony 3.2, reflecting its heritage as an incremental extension of Unicorn 3.1, the last version offered under that name.

Breeding, Marshall. The sun sets on Horizon. June 2007. Computers in Libraries. SirsiDynix announced that it had discontinued development of Horizon and would consolidate its future ILS efforts on Unicorn. Events such as SirsiDynix’s decision to consolidate to a single product cause a great deal of uncertainty and disruption for libraries and detract from the trust that’s necessary for a successful relationship between a library and its automation products supplier. SirsiDynix faces a large challenge in shoring up the trust with the Dynix/Horizon half of its customer base. The prompt delivery of truly outstanding replacement products is the only salve that will heal the wound.

Breeding, Marshall. SirsiDynix consolidates Its International operations. May 2007. Smart Libraries Newsletter. SirsiDynix took one step in its reorganization following its acquisition by Vista Equity Partners by establishing SirsiDynix International, consolidating all its operations outside North America. Prior to this move, there were separate and often independent sales, support, and administrative operations, including Asia-Pacific, Middle East and Africa, and Latin America. SirsiDynix has a broad international presence, providing library automation software to libraries in at least seventy countries. The international sector is of critical importance to the future of the company. About 25 percent of the company’s customers lie outside the U.S. and Canada. Due to market saturation in North America, the international sector offers the greatest potential market for new sales. SirsiDynix International will be lead by Keith Sturges.

Breeding, Marshall. SirsiDynix ILS set on single course. April 2007. Smart Libraries Newsletter. The June 2005 consolidation of Sirsi Corporation and Dynix created SirsiDynix,which stands as the largest company in the library-automation industry. Although many aspects of the company have been integrated, until recently the company sailed two flagship library-automation systems: Horizon and Unicorn. The company’s mid-March announcement hoists a single flagship—marking a significant change in course—based on the company's Unicorn platform. SirsiDynix entered a new phase of its corporate history when San Francisco-based Vista Equity Partners, a private-equity firm that manages about a $1 billion in assets, acquired it. Announced on December 27, 2006, the transaction closed on January 17, 2007. SirsiDynix reported it would consolidate development efforts into a single ILS platform based on Unicorn. Ongoing development on Horizon has ceased. Horizon 7.4 will be its terminal version. Libraries operating one of the SirsiDynix legacy systems—including Dynix Classic, DRA Classic, INLEX/3000, and MultiLIS—will be offered a migration path to Rome.

May 5, 2021. SirsiDynix and EveryLibrary release powerful new advocacy tool. SirsiDynix and EveryLibrary partnered together to produce a new advocacy tool, which was presented at the Customers Of SirsiDynix Users Group Inc. (COSUGI) 2021 conference. The video demonstrates the unparalleled value of libraries to their communities with reputable data, facts, and figures. Libraries can use this video in preparing for or as part of a budget advocacy meeting with local representatives.

April 14, 2021. Surrey County Council joins The Libraries Consortium. SirsiDynix announced that Surrey County Council is the latest member to join The Libraries Consortium (TLC), a rapidly expanding network of public library authorities in the UK, sharing technology, stock and expertise to increase impact at reduced cost. Surrey has 52 libraries serving 1.2 million people and this is part of the Library Transformation Programme improving services for our residents.

December 4, 2020. SirsiDynix BLUEcloud Mobile enhancements now include patron self-service and click and collect. To allow for safer, contactless circulation in response to the challenges that COVID-19 is presenting to the libraries, SirsiDynix announced enhancements to the BLUEcloud Mobile application with Patron Self-Service and Click & Collect. The new optional workflows allow patrons to use their mobile devices to check books in and out with barcodes and RFID systems. This functionality is supported by vendors such as 3M, Bibliotheca, PV Supa, FE, Envisionware, and D-Tech.

Dec 31, 2014 ICV Partners acquires majority ownership of SirsiDynix from Vista Equity Partners
A new era in the corporate history of SirsiDynix, one of the corporate giants of the library technology industry, has begun. After over eight years of ownership, Vista Equity Partners has sold SirsiDynix to ICV Partners, with Vista retaining and company executives acquiring minority stakes in the company.

Nov 01, 2013 SirsiDynix acquires EOS International from Scot Cheatham
SirsiDynix announced the acquisition of EOS International, a California-based technology company that develops award-winning solutions for legal, government, corporate, medical, and other special library customers. With 1100 implementations worldwide, EOS customers will join SirsiDynix customers to create the largest and most inclusive customer base in the history of the library automation industry.

Jan 13, 2001 Patrick Sommers appointed President of Sirsi Corporation
Sirsi Corporation announced that it has appointed Patrick C. Sommers, as president of the company. Jim Young, co-founder steps down as president and will remain the chair of the Board of Directors. Co-founders Jacky Young and Mike Murdock will also step out of day-to-day managment of the company and focus on strategic technology developments.

Jul 01, 2000 Dynix acquired by 21st Century Group
The Company is the world’s leading provider of library automation systems and software. The Company offers proprietary software along with the necessary third party hardware, software and services to deliver a complete automation solution to its library customers. The Company’s products are adapted for use in all types of libraries including academic, school, public and special libraries, varying from single site operations to large branch systems and consortia. The Company has over 4,000 customers worldwide serving more than 23,000 individual library branches. In August 2005, 21st Century Group successfully closed the merger of Dynix with Sirsi Holdings to form SirsiDynix, distributing proceeds to its limited partners, while retaining an equity stake in the merged entity. 21st Century Group fully exited its investment in January 2007, when SirsiDynix was sold to Vista Equity Partners.

Nov 05, 1996 Lana Porter named President of Ameritech Library Services
From Library Systems Newsletter: Ameritech Library Services has named Lana Porter, currently vice president of customer service in the customer business service unit of the parent corporation, as its new president. Porter's experience in the library automation industry includes having been president of LS/2000 from its acquisition by Ameritech in 1990 until its merger with NOTIS in 1992. In addition she has spent, several months as an executive in the Paris office of Dynix. Porter holds an MBA from Ohio State University and has held a number of positions in marketing, operations, and customer service, both at Ameritech and Ohio Bell.

1992 Ultimate Corp sells its stake in Dynix for $2.2 million

Although 2020 was challenging for everyone, SirsiDynix saw some significant accomplishments. Here we will list five key achievements.

In conclusion, SirsiDynix released key new products--Community Engagement Platform, BLUEcloud Mobile Self-Check/Curbside Delivery and the all-new CloudSource Open Access--to enable libraries to move forward even in a pandemic. We were also able to engage with, and assist record numbers of libraries--both customers and non-customers alike--via our online events. Truly, this was a remarkable year even though an incredibly challenging one.