LYRASIS is a non-profit membership organization 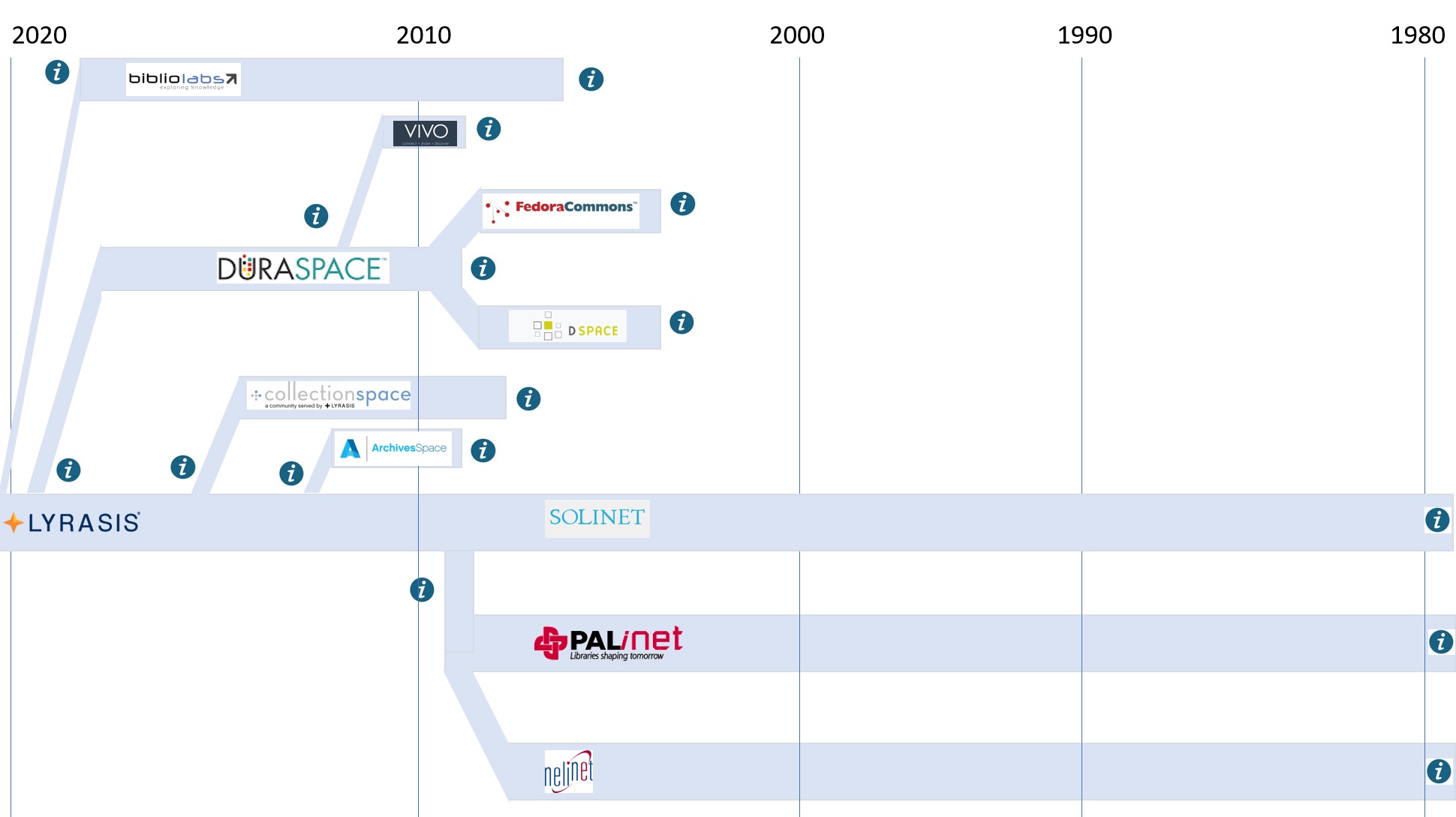 The March 2019 issue of Smart Libraries Newsletter described the anticipated merger of the DuraSpace into Lyrasis. The respective boards of directors of these two non-profit organizations have given final approval to the merger. As of July 1, 2019, the personnel and activities of DuraSpace are part of the Lyrasis organization.

Likewise, the merger of NFAIS into NISO has been finalized. NISO announced that the transfer of assets and other organizational details were completed by June 30, 2019. Key NFAIS activities such as its advocacy and educational activities, annual conference and the NFAIS Humanities Roundtable will continue within the NISO organization. NISO recently hired Jason Griffey as Director of Strategic Initiatives to support new activities of the expanded organization.

Breeding, Marshall. An Open Source Option for Public Library E-book Lending. June 2019. Smart Libraries Newsletter. A collaboration between DPLA, NYPL, and LYRASIS is working to develop a new alternative for public library e-book lending. 1 This infrastructure includes an open source repository, a mobile e-book reader, and a marketplace for libraries to purchase titles for lending. In the context where e-book lending for public libraries is dominated by commercial platforms, this new alternative represents a community-based alternative that is based on open source software and a non-profit business model.

Breeding, Marshall. DuraSpace Not to Merge with Lyrasis. July 2016. Smart Libraries Newsletter. The March 2016 issue of Smart Libraries Newsletter included coverage of the planned merger of DuraSpace into Lyrasis. The boards of both organizations had voted to pursue combining the organizations and had moved into a public comment phase. The final phase of due diligence and negotiations, however, did not result in a merger. Both organizations will continue to operate independently under their individual boards and organizational structure. Although the merger discussions have terminated, both organizations have strong issues related to open source governance and will continue informal collaboration

Breeding, Marshall. LYRASIS and DuraSpace Pursue Merger. March 2016. Smart Libraries Newsletter. In a move that would result in the consolidation of two major nonprofits providing services to libraries, LYRASIS and DuraSpace are considering a merger of their two organizations. The merger has been approved by the boards of directors of both organizations and has entered a period of public review. Both organizations will continue to operate independently until final approval for the merger takes place.

Both LYRASIS and DuraSpace operate as nonprofit organizations. LYRASIS ranks as the larger, with around 65 employees and annual income of about $75 million. DuraSpace employs about 10 personnel with less than $2 million in income. This proposed merger will expand LYRASIS' portfolio of services oriented to open source technology and will provide the projects shepherded by DuraSpace with a stable and sustainable organizational home. Both LYRASIS and DuraSpace were formed through the mergers of antecedent organizations. LYRASIS brings together a number of organizations that were previously involved as regional networks for OCLC billing and other services. DuraSpace was created to combine Fedora Commons with DSpace Foundation.

Breeding, Marshall. SOLINET, PALINET and NELINET Merge to Form Lyrasis. July 2009. Smart Libraries Newsletter. Another development involving consolidation among nonprofit organizations involves the OCLC regional cooperatives. Formally established April 1, 2009, Lyrasis emerged out of a merger between Atlanta-based SOLINET, serving a large number of libraries in the southeastern United States, with PALINET, based in Philadelphia and serving the mid-Atlantic region. The merger culminates a process that formally began in February 2008.

August 2, 2021. DSpace 7.0 is now available. The long awaited and much anticipated DSpace 7.0 is now available. This release introduces a brand new (Angular) UI which brings together the best of both the JSPUI and XMLUI worlds. All the features you've come to expect from DSpace are re-imagined and re-implemented. This new UI is also backed by a brand new REST API, which opens all data and features to the web, allowing DSpace to integrate or interact with external systems/services like never before. This release brings the entire user community under a single UI, allowing us to move more quickly together.

June 22, 2021. The New York Public Library and LYRASIS announce next steps in national e-book collaboration. The New York Public Library and LYRASIS have announced that, following a two-year collaboration to empower public libraries around the country to gain control over their e-book delivery platforms, they will be expanding their efforts on delivering a library driven library empowered ebook platform, pursuing two different opportunities towards the same goal.

March 1, 2021. LYRASIS and Michigan Publishing Advance Community-owned, Publishing Ecosystem for eBook Distribution and Reading with Open-source System Integration. LYRASIS and Michigan Publishing announce the successful integration of the Fulcrum platform with Library Simplified/SimplyE and The Readium Foundation's Thorium Desktop Reader. This initiative brings together three open source reading and content delivery platforms, utilizing entirely open standards and technologies. By working together, the partners are improving discovery and access for ebooks and supporting the sustainability and scalability of two community-led social enterprises.

Jul 01, 2019 LYRASIS and DuraSpace Complete Merger
LYRASIS and DuraSpace announce the merger of their two not-for-profits was completed on July 1, 2019, establishing one of the largest global technology and services membership organizations for research and collections holding institutions worldwide. Members will participate in developing new scalable technologies, shared innovation opportunities, and high-value, fairly priced services across the global landscape of academic and public libraries, scholarly research, archives, museums, and galleries. LYRASIS will remain the parent organization and legal entity. The governance model will continue to be a Board that is 50% member elected and 50% appointed.

Jun 15, 2015 Robert Miller named Chief Executive Officer of LYRASIS
LYRASIS, one of the nation's largest non-profit membership associations serving libraries, archives and museums, has announced the selection of Robert Miller as its new Chief Executive Officer (CEO), effective June 15, 2015. Miller will fill the position previously held by Kate Nevins, who is retiring after more than 20 years with LYRASIS and SOLINET, one of its predecessor organizations. The selection was made after a rigorous national search and was finalized by the LYRASIS Board of Trustees after their April 30, 2015 meeting.

Jan 23, 2014 LYRASIS to establish an organizational home for CollectionSpace Museum Collections Management Software
LYRASIS announced that it has received funding from The Andrew W. Mellon Foundation to bring CollectionSpace, an open source, web-based collections management system, to museums and other collecting organizations.

Jul 25, 2012 VIVO to merges into DuraSpace
VIVO to join DuraSpace as an Incubator project, the first step towards establishing the VIVO project as part of a sustainable organization.

Apr 20, 2012 LYRASIS to serve as base for ArchivesSpace
LYRASIS will serve as the organizational home for the ArchivesSpace open source archives management system.This move ensures continuity for the hundreds of archives that now depend on the Archivists Toolkit (AT) or the Archon systems to support the management of and access to archives.

May 12, 2010 Fedora Commons and DSpace Foundation merge to form DuraSpace
Fedora Commons and the DSpace Foundation, two of the largest providers of open source software for managing and providing access to digital content, have announced today that they will join their organizations to pursue a common mission. Jointly, they will provide leadership and innovation in open source technologies for global communities who manage, preserve, and provide access to digital content.

2010 ArchivesSpace launched as forward path for Archivists Toolkit and Archon
The New York University Libraries, UC San Diego Libraries, and University of Illinois Urbana-Champaign Libraries are partnering to develop a next-generation archives management application that will incorporate the best features of Archivists’ Toolkit (AT) and Archon. With funding from the Andrew W. Mellon Foundation, the project team aims to develop a technical, sustainability, and governance plan for the new system.

Apr 01, 2009 SOLINET, PALINET and NELINET Merge to Form Lyrasis
Formally established April 1, 2009, Lyrasis emerged out of a merger between Atlanta-based SOLINET, serving a large number of libraries in the southeastern United States, with PALINET, based in Philadelphia and serving the mid-Atlantic region. The merger culminates a process that formally began in February 2008.

2008 CollectionSpace Museum Collections Management Software developed
With support from The Andrew W. Mellon Foundation, CollectionSpace was developed by a network of North American and European partner organizations led by Museum of the Moving Image (MMI) in New York, which originated the project, and the University of California, Berkeley. The Statens Museum for Kunst (National Gallery of Art Denmark) in Copenhagen and Walker Art Center in Minneapolis have been involved in CollectionSpace planning, design, development, and governance since 2008. In addition to MMI and UC Berkeley, the Centre for Applied Research in Educational Technologies (CARET) at the University of Cambridge and the Fluid Project at OCAD University in Toronto developed the application's underlying software architecture. The Institute of Museum and Library Services, through a National Leadership grant, made possible the development and testing of software configurations that serve specific collection types, including art, natural history and native digital media.

Jul 2007 DSpace Foundation established as a non-profit corporation that will supply organizational, legal and financial support to DSpace

1966 NELINET established as a a member-owned and governed regional library network
NELINET, a member-owned and governed regional library network, founded in 1966 and incorporated in 1979, is one of the largest U.S. networks, serving 500 member libraries and cultural heritage organizations throughout the six New England states and internationally. NELINET provides innovative educational programs, support and services for emerging technologies (including open source software), expert library leadership and consultation services, and a regional depository.