Follett is owned by the family of Charles W. Follett 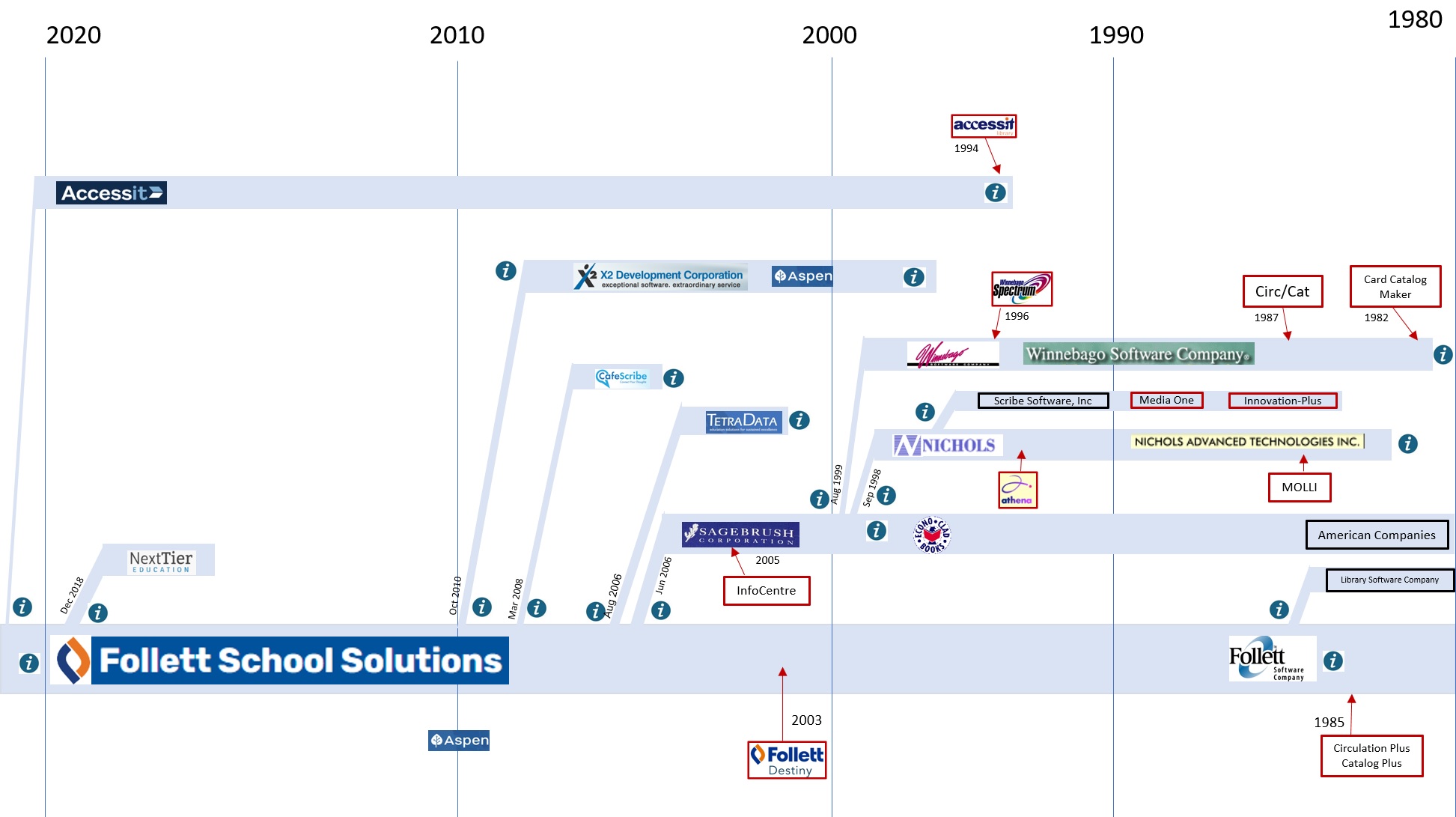 Breeding, Marshall. Follett Corporation Makes New Leadership Appointments. October 2019. Smart Libraries Newsletter. Follett Corporation, one of the largest companies providing products and services to libraries and educational institutions, has made new appointments in key executive positions. These changes apply to senior executive positions within the context of ongoing top-level leadership with Patrick Connolly as President and Chief Executive Officer and Todd Litzsinger as the chair of the board of directors.

Breeding, Marshall. Baker & Taylor Exits Services for Retail Bookstores. July 2019. Smart Libraries Newsletter. In a major shift in the retail bookseller market, Follett-owned Baker & Taylor announced that it will phase out its operations as a wholesale distributor for bookstores. The company will instead strengthen its operations related to providing books and other content to public libraries. This change is consistent with the business focus of its parent company, Follett, on libraries and educational institutions. This move will provide opportunities for large distributors such as Ingram Content Group, the other major competitor in the retail book distribution sector, as well as for smaller companies.

Breeding, Marshall. Follett Acquires NextTier Education. January 2019. Smart Libraries Newsletter. In a move that strengthens its position in the educational technology sector, Follett has acquired Chicago-based NextTier Education, a relatively new startup offering a platform designed to help students apply for post-secondary education programs. This acquisition builds on a previous arrangement announced in May 2018, where Follett became the exclusive distributor of NextTier Education products to domestic and international institutions.

Breeding, Marshall. Follett Acquires Fishtree. August 2018. Smart Libraries Newsletter. Follett Corporation, in a move that strengthens its position in educational technology for the classroom, has acquired Fishtree and its adaptive learning platform. Fishtree is a relatively new company in the rapidly expanding sector of educational technology platforms for online learning and markets its platform to K-12 schools and districts, higher educational institutions, and the corporate sector. Fishtree distinguishes its products from other players in the increasingly crowded educational technology sector through incorporating machine learning to curate and align all resources and deliver personalized experiences for every student, while reducing the time required for teachers to prepare and deliver courses. The Fishtree platform has some characteristics of a learning management system, but it is an adaptive learning platform powered by machine learning, social tools, and analytics and comes pre-populated with a large repository of educational resources.

Breeding, Marshall. Follett Expands to Dubai. February 2017. Smart Libraries Newsletter. Follett has expanded its international efforts through opening a new office in Dubai in the United Arab Emirates. The office reflects the company's interest in strengthening its business interests in the Middle East region. The Follett International group includes 35 associates, with 8 in the Middle East region. In addition to this new office, Follett has local support in Africa, Asia, the Asia Pacific region, Europe, Canada, Mexico / Central America, and South America / Caribbean.

Breeding, Marshall. Follett Corporation Acquires Baker & Taylor. June 2016. Smart Libraries Newsletter. Follett Corporation, one of the major companies providing products and services to schools and higher educational institutions, has taken its largest expansion step of with the acquisition of Baker & Taylor, one of the oldest and largest providers of content to libraries. This move not only further diversifies Follett's product and services portfolio, but it also extends its presence internationally. Previously almost all of Follett's business has been in the US With customers in more than 120 countries, Baker & Taylor has considerable international reach. This move means more involvement by Follett with public libraries, expanding beyond its previous focus on schools and academic campuses. According to the press announcement, this acquisition increases Follett's annual revenue from $2.6 billion to $3.6 billion.

Breeding, Marshall. Tech Trends and Challenges for K-12 School Libraries. September 2013. Computers in Libraries. Though all libraries share some core objectives, each type of library has a distinct set of issues that shapes the nature of its collections and services, which, in turn, brings different requirements to its technology environment. In the most basic terms, academic libraries focus on the management and access to scholarly materials, public libraries foster engagement with their communities through vigorous circulation of collections of broad popular interest, and special libraries have gravitated into the realm of enterprise knowledge management. Likewise, school libraries have their own distinct concerns, which are closely tied to the support of learning and the provision of resources selected for the levels of students served. The distinctive role of school libraries has fostered the development of a variety of specialized technology products. At the same time, school libraries can benefit from close collaboration with other libraries in their communities. This month's Systems librarian column explores some of the trends underway in the school library arena, including a few interesting partnerships that have emerged to strengthen their capacity to serve their students.

Breeding, Marshall. Sagebrush sold to Follett Software Company. September 2006. Smart Libraries Newsletter. Sagebrush Corporation has sold its library-automation division to longtime rival Follett Corporation, a move that consolidates the two largest K–12 library-automation software suppliers. This acquisition creates an organization that holds a stronger position than has ever existed in the library-automation arena. Now combined, the vendors provide automation software to up to 60 percent of K–12 libraries. The two companies closed the transaction on July 25, 2006; the terms of the sale were not made public.

April 5, 2021. Baker & Taylor's Aman Kochar named Top Global Leader In EdTech awards. Amandeep Kochar, executive vice president and general manager of Baker & Taylor, has been named winner of the “Global Leader” category in the 2021 EdTech Awards by EdTech Digest. The award is from “The EdTech Leadership Awards” portion of this year's contest.

November 21, 2020. Follett Book eFairs enhance shipping options to include students homes. Follett Book eFairs continue to grow in popularity due to their streamlined setup and the ease with which coordinators can carry them out. Yet another convenient feature was added today when Follett announced it will ship online book fair orders directly to students' homes. Online book fair coordinators can now choose to have books shipped to either the school or students' home -- a convenience that Britten Follett knows will be met with applause from educators as well as elementary and middle school students and their families.

November 17, 2020. Follett Adapts SIS to Help Districts During Distance Learning. As the COVID-19 pandemic calls upon many schools and districts to continue distance learning, Follett has responded to educators' needs by adding new convenient features to its student information system, which serves more than two million students throughout the United States and Canada.

Nov 16, 2016 Follett acquires Valore Inc.
Follett Corporation announced it has acquired Valore Inc. and the ValoreBooks marketplace solution for students and bookstores to buy, sell and rent college textbooks online. Combining the convenience of the ValoreBooks marketplace with the scope and capabilities of Follett will provide campus stores and students greater access to more affordable course material options.

Apr 18, 2016 Follett acquires Baker and Taylor from Castle Harlan
Follett Corporation acquired Baker & Taylor, the leading distributor of books, video and music products to public libraries and institutions, and a major wholesaler to retailers worldwide. With combined sales of $3.6 billion, the two businesses will offer librarians, patrons, educators and students unprecedented access to the best curated physical and digital content wherever learning and reading take place in the community.

Feb 23, 2016 Follett acquires ClassBook
Follett acquired ClassBook, one of the K-12 education industry's leaders in customized online bookstores that serve schools, teachers, parents, and students. Founded in 1992 and based near Albany, N.Y.,ClassBook provides private and parochial schools with 24/7 bookstores, streamlining and personalizing the ordering and fulfillment process for print and digital textbooks.

Jan 27, 2014 Todd Litzsinger named chairman of the Board of Directors for Follett Corporation
Litzsinger joined Follett in 1992 and has served on the Board since 2003. He has held a series of increasingly responsible leadership positions with the Company, most recently President of Content Solutions and Services for Follett School Solutions, the Company's PreK-12 business. Litzsinger's career with Follett includes roles in the Company's PreK-12 school and library market, including President of Follett Library Resources, President of Follett Educational Services, President of BWI, and National Sales Director for Custom Academic Publishing Company (CAPCO), a joint venture with BMI Systems. Prior to Follett, he worked for Jostens, the school yearbook and ring company.

Nov 2012 Mary Lee Schneider elected President and Chief Executive Officer of Follett Corporation
Schneider is an 11-year veteran on the Follett Board of Directors. She is widely recognized as a digital innovator and a visionary leader – a result of her extensive experience in digital publishing and leadership positions. Schneider comes to Follett from Chicago-based RR Donnelley, where she recently was President, Digital Solutions and Chief Technology Officer. [From company Web page]

Mar 24, 2008 Follett Corporation acquires Fourteen40 Inc, including social networking solution CafeScribe
Follett Corporation today announced the acquisition of technology firm Fourteen40 Inc., an innovator of Web 2.0 social networking for collaborative learning. The acquisition includes Fourteen40's social networking solution called CafeScribe (http://www.CafeScribe.com), an online site at which students can browse, purchase and download eBooks that they need for class. Once the eBook is downloaded, the students use a digital content reader called MyScribe to easily read and annotate the eBook, search the Internet and share notes with others as they study. The social networking tools within CafeScribe give students the option to invite others into the virtual equivalent of study groups.

Feb 25, 2008 Follett Corporation acquires Varsity Group Inc.
Varsity Group Inc. (NASDAQ: VSTY), a provider of online textbook sales and services to educational institutions nationwide, today announced that it has entered into a definitive merger agreement with a subsidiary of Follett Corporation, the nation's largest provider of library materials and library technology to K-12 schools, the leading operator of college bookstores and a major distributor of textbooks to institutions at all levels of education. Pursuant to the merger agreement, Follett will acquire all outstanding shares of Varsity Group for $0.20 per share in cash.

1873 Predecessor of Follett Corporation founded in 1873 by Charles M. Barnes as a used book store in Wheaton, Illinois

This year we released a brand-new Destiny Discover App to IOS and Android platforms. This app allows a student to interface with all their Follett Digital content. The App also allows them to see and interact with all their print books in their library as well. In this time of COVID, this allows the student to interface with their content regardless of whether they can enter the library.

This year we brought many new features to the Destiny Discover website. We allowed our librarians to customize the content they show to their patrons. Also gave them the ability to share their content out to the Learning Management system through LTI Thin Common Cartridge. Finally, we gave the librarians the ability to reach their students even when they couldn’t see them in person. This was accomplished by allowing them to post videos and pictures to the homepage.

Finally, when it comes to Destiny Back office, we gave the Districts the ability to Quarantine their print material when it returned from being checked out. We continue to strive to make sure librarians have the tools to be relevant in this ever-changing world.