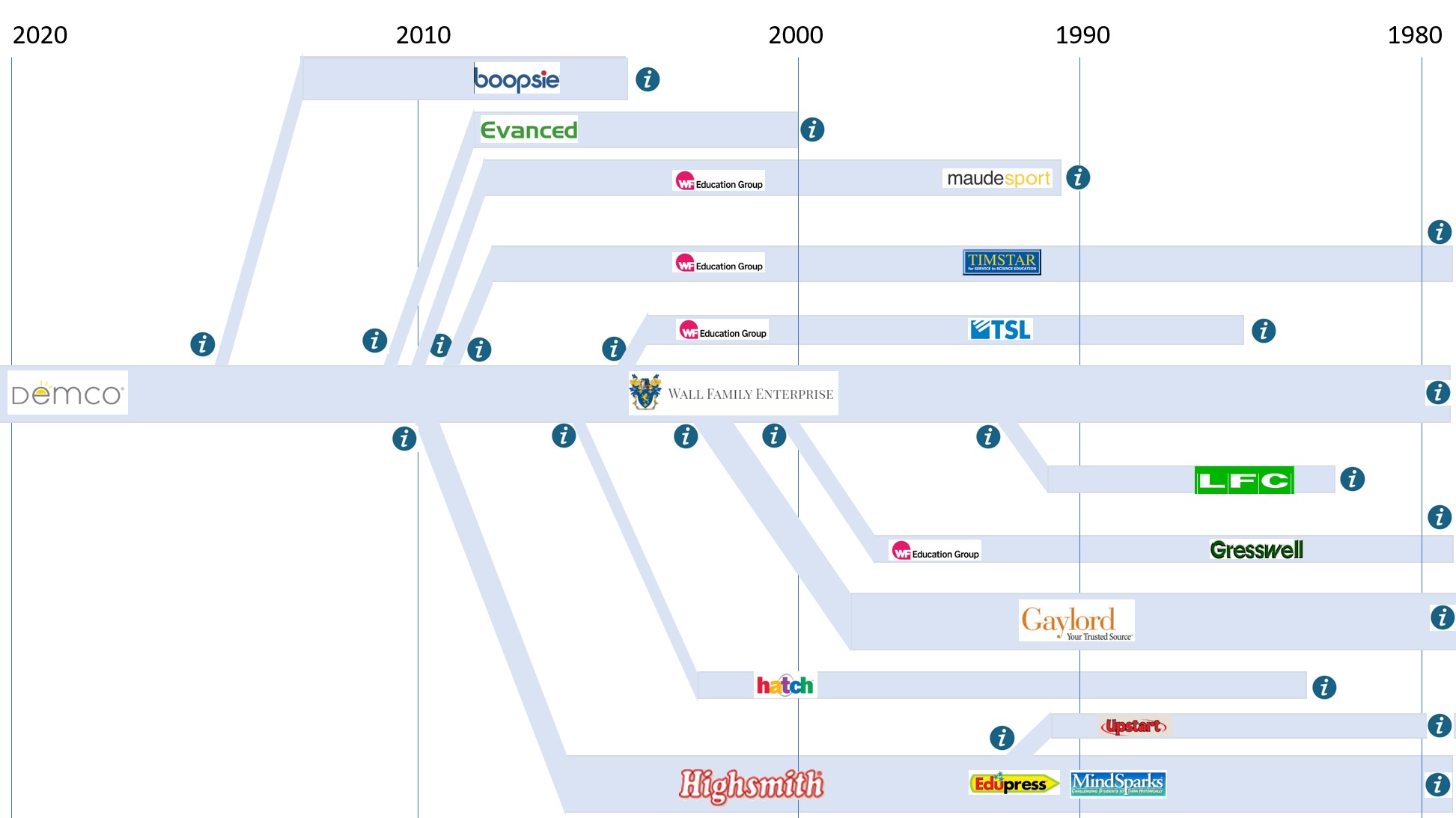 Breeding, Marshall. Demco Software Established. June 2017. Smart Libraries Newsletter. Demco Software has been established as a new technology-focused company, operating as a division of Demco, Inc., a major distributor of furniture, supplies, and other products. This new division brings together the technology companies that Demco has recently acquired, Evanced Solutions and Boopsie.

June 11, 2020. Leading school and library supplier Demco gains new leader. Demco, Inc., and its parent company, Wall Family Enterprise, announced the appointment of Chad Edwards as president of Demco. He will begin in his new role on June 22, 2020.

January 22, 2018. US Armed Forces Offer Brain Training to All Personnel. In recognition of recent breakthroughs in brain science, every soldier, sailor, airman and marine in the US Armed Forces will now have access to computerized brain training and assessments from Posit Science, through its BrainHQ web, phone and tablet apps.

January 19, 2018. Department of Defense makes brain training available using Demco Software and BrainHQ. Demco Software has partnered with the U.S. Department of Defense through the libraries of the Air Force, Army, Navy, and Marines to provide BrainHQ online brain training to members of the armed services. Now, a library card is all that active, reserve, and retired personnel and their families need to take advantage of scientifically-proven brain training. BrainHQ is available through Demco’s software platform, which offers 24/7 access to this online resource from the comfort of the patron’s device of choice.

October 17, 2017. Demco Software reinvents its Boopsie library mobile app with Demco DiscoverMobile. Demco DiscoverMobile is the next generation of the popular and much-loved Boopsie mobile app. The new app presents library information in the increasingly popular at-a-glance format, streamlining how patrons browse collections, check out titles, and register for upcoming events via their smartphones.

September 29, 2017. University of Pretoria Library expands digital access to its resources with Demco Software. Department of Library Services at the University of Pretoria has launched a customized app that provides one-click access to its library’s assets, empowering researchers to use resources and services when and where they need them. Fully hosted and maintained by Demco Software, the University of Pretoria’s Boopsie mobile app will feature custom branding on a user-friendly interface, facilitating seamless access to authoritative content from trusted aggregators and publishers. A modifiable banner will increase visibility of key resources, and unique features will expand access to the library. Key among these are Ask a Librarian, Catalog Search, Subject Guides, Library Locator, Location and Hours, and social media integration.

September 13, 2017. Demco Software transforms library event marketing with DiscoverLocal. Demco Software today highlighted the far-reaching capabilities of DiscoverLocal, its latest innovation that gives libraries priority in local search results. Launched in June 2017, the new product is the first truly comprehensive discoverability tool that promotes libraries’ events and resources on the open web without requiring a library name to be mentioned in the search query.

Sep 30, 2020 Solus UK acquires Boopsie Mobile App Division from Demco, Inc
Solus UK announced it has acquired the Boopsie mobile app and customer base from Demco, Inc. All Boopsie customers will be migrated to the latest Solus Library App at no additional cost to their existing subscription.

Jun 11, 2020 Demco appoints Chad Edwards as President
ChampionScott Partners is pleased to announce the appointment of Chad Edwards as President of Demco, Inc., a Wall Family Enterprise subsidiary and provider of product and service solutions to schools, libraries and commercial enterprise libraries. Chad brings over 20 years of education technology and services industry leadership experience to Demco.

Aug 24, 2009 Demco Europe acquires Timstar Laboratory Suppliers
Crewe-based Timstar Laboratory Suppliers has been sold to Demco Europe, a UK subsidiary of the US-based Wall Family Enterprise. The company, which is owned by husband-and-wife team Tim and Sue Wilton-Morgan, last year generated pre-tax profits in excess of £300,000 on revenues of £4.7m. The deal will enable Tim, who established the business in 1970, to retire. BCMS advised.

Mar 1989 Greg M. Larson is named president, and John Wall becomes chairman and CEO.
In March 1989, DEMCO announced that Greg M. Larson was its new president. With Larson's appointment, Wall became the company's chairman and CEO. Larson, who had served DEMCO for five years as vice-president of marketing, earned an undergraduate business degree from the University of Wisconsin-Whitewater in 1972, followed by an MBA from the University of Wisconsin-Milwaukee in 1981.

1978 President John Wall leads a successful leveraged buyout of DEMCO.
"An important development occurred in 1978, when an Alabama firm offered to buy DEMCO from Banta. Along with William Erickson, vice-president of operations; Greg Larson, vice-president of marketing; and Lawrence Sobyak, vice-president of finance, President John Wall made a successful counteroffer and purchased DEMCO. However, significant challenges remained. These included a loan that carried an interest rate of 25 percent, as well as a debt-to-equity ratio of 11 to 1. DEMCO's Alesco subsidiary also was struggling financially. In the May 1993 issue of In Business, Wall said: "There were 24 people at the closing downtown, including all the vice-presidents from Banta, and they were saying, sotto voce, down at the end of the table, 'They'll never make it. They'll go bankrupt in six months.'" Although the buyout put a strain on DEMCO's resources until the mid- to late 1980s, Wall and his executive team were successful in keeping the company afloat and guiding it to more prosperous times."

1968 John E. Wall is named president of Demco
One of the most important developments in DEMCO's history occurred in 1968, when John E. Wall was named president. He would provide valuable leadership to the company for many years. Born in Chicago on April 17, 1926, Wall served in the U.S. Navy Air Corps during World War II and earned an undergraduate philosophy degree from Xavier University in 1950. His professional management career began that same year at Inland Steel Co. in Indiana Harbor, Indiana. Wall's career path then took him to a number of manufacturing firms in the Chicago area, including Cook Electric. After joining DEMCO, Wall invigorated the company in a number of ways. Despite a burgeoning education market during the 1960s, DEMCO's growth had been sluggish because of a culture that downplayed risk taking. According to the May 1993 issue of In Business, Wall "wandered around, asked people questions, and gave them the go-ahead to try new ideas. He had employee luncheons and set up quarterly 'state-of-the-company' meetings with managers and year-end meetings with all employees. Another step Wall took early on was to set up a board of outside directors."

1931 Norman D. (Smiley) Bassett purchases DEMCO.
Norman D. (Smiley) Bassett, who purchased DEMCO in 1931, has been credited as DEMCO's founding father. Born in Minneapolis on Nicolet Island, Bassett graduated from the University of Wisconsin in 1914 after attending the Jefferson School in Charlottesville, Virginia, and New Jersey's Lawrenceville Preparatory School. He served in the U.S. Navy and Air Corps during World War I and then pursued a successful business career. After buying the DEMCO division from Democrat Printing, Bassett established it as an independent enterprise, and the former parent company reorganized as Webcrafters, Inc. As DEMCO's president and chairman, Bassett led the company for many years.