The Bibliotheca Group is financially backed by One Equity Partners, a division of JP Morgan Chase & Co. 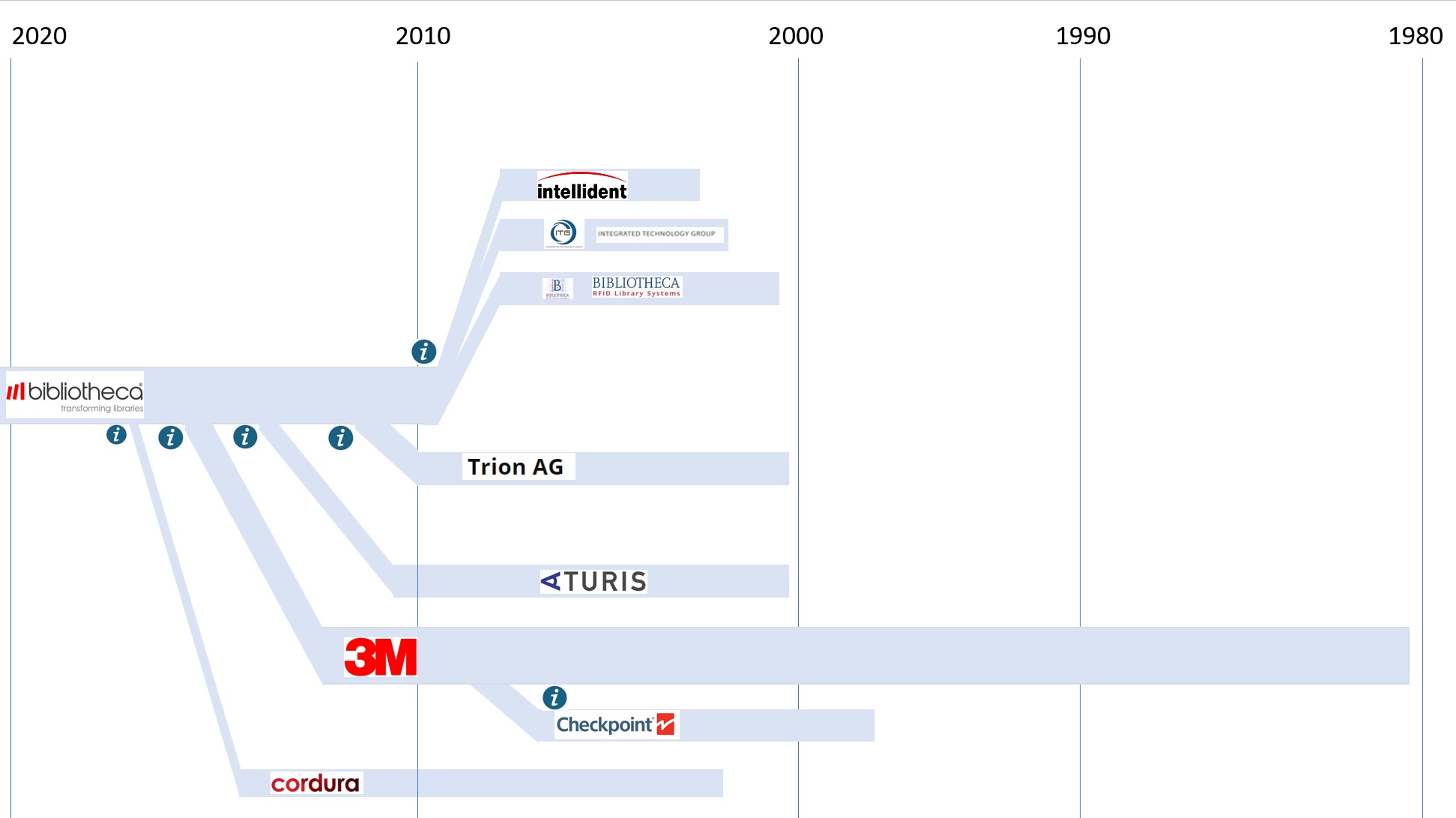 Breeding, Marshall. Bibliotheca Launches biblio+. December 2021. Smart Libraries Newsletter. Bibliotheca has launched a new streaming entertainment service for libraries under the brand biblio+. This service addresses the complications and complexities associated with many of the existing library-oriented video services. Libraries pay an “unlimited access fee” for unlimited access to a wide selection of content. This fee is not tied to the volume of use by their patrons either in terms of simultaneous use of a title or the total number of titles viewed.

Breeding, Marshall. New Ownership for Baker & Taylor. December 2021. Smart Libraries Newsletter. Baker & Taylor, a major distributor of print and ebooks to libraries has changed ownership. The company has separated from Follett Corporation and has been acquired by a group of private investors led by President and Chief Executive Officer Amandeep Kochar. The composition of the investment group has not been publicly disclosed.

Breeding, Marshall. Bibliotheca Makes Organizational Changes. November 2018. Smart Libraries Newsletter. Bibliotheca, a large consolidated company offering self-service, material handling, and e-book technologies to libraries, announced organizational changes to its North American operations. Matthew Bellamy, who came to the company when it acquired 3M Library Systems, was recently named as President for the Americas. He will lead the company's operations in the United States, Canada, and Brazil as well as coordinate with its business partners throughout Latin America. Bellamy was previously the Chief Commercial Officer for bibliotheca's global organization. Tom Henke has joined bibliotheca as Vice President of Sales for North America and Partners America. Prior to this role, Henke served as Vice President of Sales and General Manager for Blackboard. Gary Gillem has joined bibliotheca as Inside Sales Manager.

Breeding, Marshall. Consolidation in the RFID and Self-service: Bibliotheca Acquires 3M Library Systems. December 2015. Smart Libraries Newsletter. Bibliotheca, a company specializing in self-service, sorting, and other productivity products for libraries, has continued its global expansion through the merger of 3M Library Systems into its organization. This move brings together the two largest competitors in this sector. Prior to this merger, Bibliotheca and 3M Library Systems dominated the market, competing head-tohead in many international regions. Now a single, much larger entity operates globally, with competition provided through mid-sized and smaller companies in each market.

Breeding, Marshall. New Management at Bibliotheca. October 2012. Smart Libraries Newsletter. Bibliotheca, the consolidated global company specializing in RFID products for libraries, announced a change in executive management of its North American operations. Shai Robkin will step down as President, and Al Coalla, formerly North American Sales Director will step into this position on October 1, 2012. Coalla joined Biblioteca in November 2011 and previously served as Director of Sales at EnvisionWare.

Breeding, Marshall. Bibliotheca enters E-Book arena. July 2012. Smart Libraries Newsletter. Bibliotheca, the globally consolidated company built around RFID technologies, has expanded its business interests to include a new set of products based on e-books. The company has not yet provided detailed information regarding the components of its planned product and service offerings related to the management and lending of e-books, though it has outlined its general strategy.

. Bibliotheca unveil single global brand for 2012. March 5, 2012. . Bibliotheca, one of the leading global providers of RFID-based solutions to public, private and academic libraries, has launched its new global brand, allowing the Group to unite its entities under one central identity. The rebranding follows the merger of Bibliotheca (Switzerland), Intellident (UK) and Integrated Technology Group, ITG (North America) in June 2011, which created one of the largest RFID library specialists in the world. This position was further enhanced in January 2012, with the acquisition of Trion Library Systems, one of the world’s leading manufacturers of Automated Materials Handling (AMH) solutions designed specifically for libraries.

Breeding, Marshall. Bibliotheca Acquires Trion AG. March 2012. Smart Libraries Newsletter. The consolidation of the library RFID industry and the growth of Bibliotheca continues with the February 2012 announcement of its acquisition of Trion AG. Trion ranks as a major manufacturer of automated materials handling equipment for libraries.

. How is the merger between Bibliotheca and ITG different from other consolidations that the library technology market has seen?. May 7, 2011. . his is a merger of equals.Neither of the two staffs is disappearing; the sales, support and development personnel of both Bibliotheca and ITG remain in place. The management team of Bibliotheca ITG is comprised of members from both Bibliotheca’s North American operation and ITG. While one of the objectives of any merger is to reduce costs, at Bibliotheca ITG, this is to be achieved by leveraging purchasing power and by eliminating redundancies in marketing, administration and finance.

Breeding, Marshall. Global Consolidation: Three firms Join to gain Global RFID Synergies. July 2011. Smart Libraries Newsletter. Over the course of the last few months, a series of business transactions have consolidated a group of companies in different international regions into a single corporate structure focused on providing RFID and related products. Each of these companies brings a different set of assets and strengths to a broader organization to constitute a new company with a worldwide impact on the library RFID industry. The transactions span Europe and North America, and involve a variety of incumbent companies including Bibliotheca RFID Systems (based in Switzerland), Integrated Technology Group (North America), and Intellident (United Kingdom and France). The business transactions result in three operational companies in different geographical regions that comprise a new virtual company bound together under unified ownership and executive management. The transactions bring all of the companies under a single global holding company called Library Solutions BV, incorporated in The Netherlands. Library Solutions BV is majority owned by One Equity Partners , a division of JPMorgan Chase & Co, (http://www. oneequity.com/) a major firm with over $8 billion in investments. Other minority shareholders include Shai Robkin, who also owns Vernon Library Supplies.

August 11, 2022. BBC partnership brings iconic shows and kids programming to Bibliotheca. biblio+, Bibliotheca's streaming video service, announced today a partnership with the BBC that will bring thousands of hours of top British television and film to the platform for unlimited viewing by library patrons

March 10, 2022. Bibliotheca highlights sustainability, ecosystem, and virtual library at PLA 2022. Bibliotheca is bringing a host of new experiences to this year's Public Library Association Conference in Portland, OR March 23-25. After a two-year conference hiatus, Bibliotheca is coming back better than ever with a new booth featuring the entire ecosystem of Bibliotheca products, including the brand-new remoteLocker outdoor, biblio+ unlimited streaming entertainment service, and uniFi+ a digital library information distribution platform, as well as an immersive virtual library experience that makes it easier than ever to imagine what a library can be.

November 2, 2021. Integrated library communications now available globally with uniFi+ . Bibliotheca has announced that its integrated communication system, uniFi+, first released in Scandinavia in 2019, is now available to libraries worldwide. Unlike traditional digital signage, uniFi+ uniquely integrates with public PCs, Bibliotheca selfChecks, remoteLockers, and other solutions to enrich communications inside and outside the library walls. Developed specifically for libraries, uniFi+ allows content to be pushed to multiple screens across multiple branches while still allowing branches the autonomy to add specialized content for their users.

October 12, 2021. Biblio+, a library of entertainment at your fingertips. Bibliotheca unveiled biblio+, a new streaming service for libraries and their patrons, in a live virtual event attended by 400 librarians from all around North America.  biblio+ is turning the library streaming model on its head by offering unlimited, ad-free streaming for one affordable subscription price.

May 01, 2011 One Equity Partners acquires Intellident