Abstract: Ingram Content Group has entered into a definitive agreement to divest VitalSource Technologies LLC, its business dedicated to electronic textbooks and technologies for the creation of educational resources for academic institutions, corporations, and related organizations. Francisco Partners, a private equity investment firm focused on technology-based companies, has entered into a definitive agreement to acquire VitalSource Technologies. The agreement was signed in April 2021 and is expected to close later in the year.

Ingram Content Group has entered into a definitive agreement to divest VitalSource Technologies LLC, its business dedicated to electronic textbooks and technologies for the creation of educational resources for academic institutions, corporations, and related organizations. Francisco Partners, a private equity investment firm focused on technology-based companies, has entered into a definitive agreement to acquire VitalSource Technologies. The agreement was signed in April 2021 and is expected to close later in the year.

VitalSource Technologies is a learning technology and digital content company. The company currently serves 8,000 institutions and more than 1,000 publishers and resellers to provide digital course materials and learning solutions to 16 million users globally. VitalSource is based in Raleigh, NC, and has offices in Boston, San Francisco, Seattle, as well as in England and Australia.

The company has developed through an interesting trajectory. From its beginnings as academic research project, it evolved to a founder-led startup created as a university technology transfer and later was a subsidiary of a global company. VitalSource Technologies will now enter a new phase as a portfolio company of Francisco Partners.

The company was a pioneer in developing technologies to convert educational content into digital textbooks for online learning environments. Vital Source Technologies was founded by Dr. Todd Watkins, Jr., an educator in the dental program at the University of Texas Health Science Center in San Antonio (UTHSCA) with a joint appointment in Educational Resources. Watkins led the research and development of technologies for computer-based learning technologies and the use of problem-based learning in health science curricula.

While in dental school at the University of North Carolina Chapel Hill, Watkins had developed an early ebook format based on Standard Generalized Markup Language (SGML), the then prevailing syntax for structured documents. As a faculty member at UTHSCA beginning in 1990, Watkin's research included developing ebook applications. The first 1991 prototype, called “Macinstein,” was built with Apple Hypercard, which led to an Apple “Seed” Hardware Grant from Apple Computer. The goal of Macinstein was to reanimate static textbooks into a working digital library on laptops.

In June 1994 Watkins founded Vital Source Technologies as a technology transfer initiative of the University of Texas (UT) system, exploring opportunities to commercialize these learning technologies. The UT administration considered the research as more of a product development endeavor than a pure research project. Company shares were split equally between the University and Watkins. William Chesser (now vice president for customer success) joined Vital Source Technologies in 1996 as the company's second employee. Other members of the initial core team included Rick Johnson (now VP for product strategy) and Willie Abrams (vice president for software development). All three have continued in executive positions with VitalSource Technologies through each phase of ownership.

The vision of the company built on Watkins prior research to bring education into the digital age, especially through replacing print textbooks with electronic versions. The company designed the VitalBook and VitalViewer products to support digital courses prior the availability of web-based courses. Due to network bandwidth and computer memory limitations of the time, the early products of the company were delivered on DVD discs. The underlying technologies included digitization of printed materials, XML markup schemas, content syndication, and digital rights management. Complete materials for a course would be digitally packaged into a VitalBook electronic textbook, including core content, notes, microscope slides, and syllabi. Searching across texts was a key advantage over print textbooks. According to Watkins, “At that time these concepts were considered radical.”

During this start-up phase, development focused on the publishing and distribution technologies to support the company's initial offerings. The company's VitalViewer was created by licensing and reengineering the Apple DocViewer with a new core document processing engine based on XML and a file structure compatible with both Apple and Windows computers. The company was also the first to use the Sony DVD format to distribute data files rather than video content.

In the 2000-2001 academic year, following a four-year period of research and development, VitalSource Technologies launched its products in educational programs in schools of dentistry.

Vital Source Technologies found its first opportunities as a provider for digital courses for health science learning centers. The initial product provided the entire curriculum for a four-year dental school program. According to Dr. Watkins, schools of dentistry proved to be an ideal proving ground for the concept of digital textbooks. Other disciplines such as general medicine or nursing represented higher stakes for textbook publishers, which would have been threatened by the possibility of digital textbooks overtaking print versions. Over time, the company expanded into other health science fields, academic disciplines, and corporate training.

Danny Mills, running a San Antonio incubator for technology start-ups (SATEX), secured the initial two rounds of venture capital. These initial investors included Frank Daniels III, who joined the company's board of directors. These investments funded the development of the VitalSource curricula, which were completed in time for initial deployment in 2000.

These products were designed to offer features easily used by instructor and students and based on technologies that protect unauthorized access and distribution of copyrighted content. According to Watkins, the initial launch included 80 electronic textbooks with content from 11 publishers adopted by five dental schools.

VitalSource Technologies partnered with multiple publishers through licensing and distribution agreements. Some of the early publishers involved included:

The next round of programs included other disciplines:

In January 2001, Watkins and Mills recruited board member Frank Daniels III to serve as chief executive officer of VitalSource Technologies in 2001. Watkins continued as a board member while focusing on research into curriculum uses of the technologies. At this time VitalSource sold the managing control of the company to the Daniels family, which had recently sold interests in Total Sports, Inc and the Raleigh, NC based News & Observer, one of the first newspapers to invest in computer technologies. Under Daniels, the company shifted its business model from direct digital content processing and distribution to publisher services.

Dr. Watkins has continued as an entrepreneur. In June 2018, for example, he founded XComP Analytics, Inc., a startup developing analytics technologies to assess the performance of students and educational programs. Watkins was recently awarded three patents in this domain. Watkins currently serves as assistant dean for Dental Education and Informatics for the East Carolina University School of Dental Medicine.

In its first decade of business, VitalSource Technologies was able to build a successful company based on the vision of its founder to bring textbooks and learning programs into the digital age. The company found a receptive niche market among schools of dentistry, a natural fit with the interests of the founder. Its educational products were also adopted by some K-12 School Districts, often in association with programs to place IBM ThinkPad laptops in the hands of students. Success in this niche market demonstrated potential for growth and expansion into the broader realm of digital content and educational technologies.

Positioning VitalSource Technologies for sale begin in January 2004 with the appointment of Clay Dunnagan, an investment banking professional, to lead the company's business development strategies.

The company was initially placed within Ingram Digital Ventures. Though under ownership and strategic leadership of Ingram, VitalSource Technologies operated as an independent business unit. The acquisition by Ingram provided access to a global network of publishers and content providers to expand its educational platform. Ingram also acquired additional companies that were merged into VitalSource Technologies to accelerate its growth and business opportunities.

Skip Prichard, previously chief operating officer of Ingram Book Company, led the restructuring and became chief executive officer of Ingram Content Group in January 2008, a position he held through June 2012, when he left to become president and CEO of OCLC.

Under Ingram, a number of individuals held leadership positions, though the roles and titles were fluid. Some of the key executives included:

Ingram Content Group made multiple acquisitions of related businesses that were integrated into VitalSource Technologies, positioning the company at the forefront of market innovation and digital transformation. The following acquisitions contributed to the consolidation of the electronic textbook arena and expanded its product portfolio.

According to Freeman, VitalSource is well positioned as it moves out of Ingram Content Group into new ownership:

“As a recognized innovator in the digital course materials market, VitalSource is best known for partnering with thousands of academic institutions, publishers, and resellers to deliver extraordinary learning experiences to millions of active users globally–and today VitalSource is also powering new, cuttingedge technologies designed to optimize teaching and learning for maximum results.” 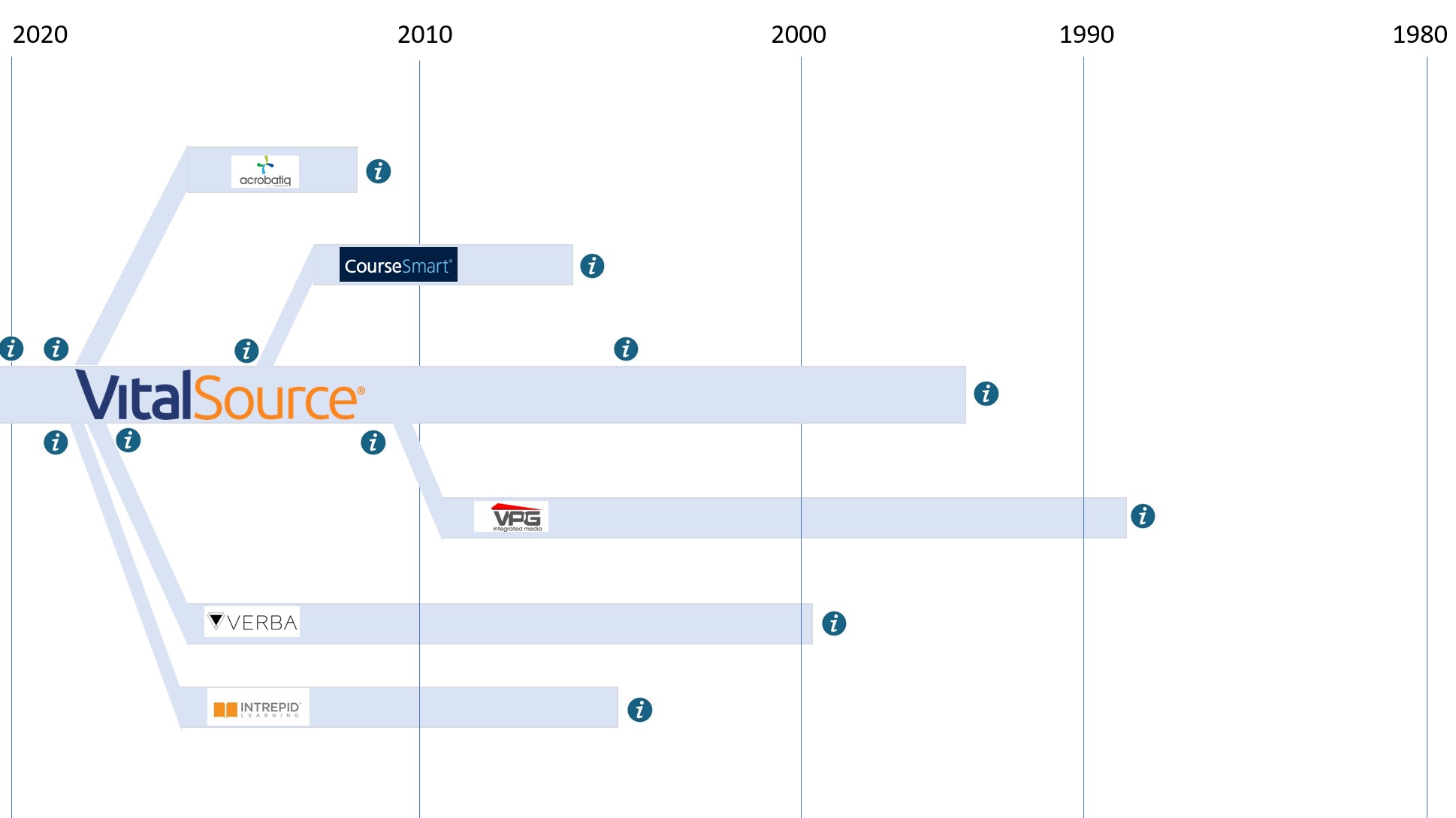 Under Ingram Content Group, VitalSource Technologies developed into a mature business with a portfolio of products and services and a substantial global client list. Through the pending sale to Francisco Partners, VitalSource Technologies becomes part of a private equity firm with a track record of shepherding mid-level technology-based companies though new phases of business expansion. It will continue to be led by the current executive team. Francisco Partners invests in tech companies in multiple business sectors, including healthcare, higher education, internet infrastructure, and financial services. The firm has raised over $24 billion of capital since its founding in 1999.

Francisco Partners has invested in the library technology sector previously. The company owned Ex Libris from June 2006 through August 2008. It also acquired Endeavor Information Systems from Elsevier and merged the company into Ex Libris, creating the leading systems provider for academic and research libraries. During the period, investments from Francisco Partners drove the development of the Primo discovery product and Verde for electronic resource management as well as accelerating the development of the SFX link resolver and knowledgebase.

Francisco Partners brings substantial experience in supporting companies involved with educational technologies. Some of its portfolio companies in the educational sector include: