OverDrive, the largest commercial provider of e-books and other digital content to libraries, issued a Christmas Eve announcement of its pending change in ownership. The company's current owner Rakuten has entered into a definitive agreement to sell OverDrive to KKR, a major US-based investment firm. As digital lending continues its steady rise, this news sparks interest and raises questions for the library community.

OverDrive holds the dominant market share as the leading provider of digital content to libraries for lending, with more than 43,000 libraries subscribing to its content lending platform. OverDrive's catalog currently offers 4.5 million books and audiobooks from over 25,000 publishers. Over 95 percent of public libraries in the United States and Canada rely on OverDrive for digital lending, often supplemented by other services. Though public libraries represent the largest portion of OverDrive's customers, it also works with schools and corporate libraries. Libby, introduced in 2017, enables library patrons to search, checkout, and read e-books and audiobooks that their library has acquired through OverDrive.

Rakuten, a large multinational conglomerate based in Tokyo, acquired OverDrive in March 2015 via its subsidiary Rakuten USA in a transaction valued at $410 million. OverDrive resides within its digital content portfolio, which also included Rakuten TV, Viki, and the Kobo platform for e-books and audiobooks. OverDrive's position in library lending complemented Toronto-based Kobo's focus on e-readers and content for the consumer market.

Founded in 1997, Rakuten employs over 17,000 personnel spanning 30 countries and has an annual revenue exceeding $10 billion. The company's 2018 annual report emphasized the company's expansion as a telecommunications provider in Japan, working toward a fully cloud-based 5G mobile network. Within a company mostly focused on consumer-facing technologies and services, OverDrive was the company's only library-oriented business.

The acquisition of OverDrive by Rakuten would be described as a strategic investment, where a company is acquired by a larger entity with related business interests, usually with expectations enabling new synergies or efficiencies. Strategic investments usually endure for the long term, with the acquired company progressively integrated into the business and technical infrastructure of the acquiring organization. Within the library industry, companies like EBSCO Information Services and ProQuest periodically make strategic acquisitions and rarely sell off any of their portfolio companies.

The divestment of OverDrive after less than five years implies that Rakuten was not able to achieve the expected synergies within its digital content portfolio. In the context of the size of Rakuten and its broader business strategies primarily targeting consumers, OverDrive as a digital content provider to libraries may not have been a comfortable fit in the long term. Although no longer under common ownership status, the interoperability and partnerships between Kobo and OverDrive will likely persist.

Upon close of the transaction, which is expected in the first quarter of 2020, KKR will assume ownership of OverDrive. Steve Potash will continue to lead the company as its Chief Executive Officer. Although the announcement did not disclose details of the transaction, a value of about $775 million can be inferred by combining the $410 million that Rakuten paid in 2015 with the 365.6 million profit Rakuten reported on this investment.1

The proposed acquisition of OverDrive by KKR is a financial investment, where the buyer, usually a private equity firm or other financial sponsor, expects to increase the value of the company over a finite term, typically five to seven years. Financial investments by private equity firms often take the form of leveraged buyouts, where the buyer contributes only a portion of the purchase price and secures loans from investment banks to meet the full purchase price negotiated with the seller. Financial buyers control the business strategies and operations of their portfolio companies via placement of representatives on their board of directors, usually in proportion to their ownership stake. The company itself is saddled with the responsibility to pay off the debts incurred. The debt and fees associated with a leveraged buyout are a component of the economic reality of companies following a leveraged buyout, but these transactions also provide the company with new capital to fund business expansion and product development. With assets of $208.4 billion, KKR has a diverse portfolio of companies that span many industries. The acquisition of OverDrive was executed via its KKR Americas XII Fund. Both KKR and Rakuten have wide-ranging investments, including some in common. Rakuten is an investor in Lyft, holding an 11 percent stake in the company and reporting a $947 million loss on that investment in November 2019.2 KKR made a substantial investment in Lyft in April 2017.

KKR also owns RBmedia, one of the major suppliers of audiobooks to libraries. In a transaction announced in July 2018, KKR acquired RBmedia from Shamrock Capital Advisors. This investment was also made through its KKR Americas XII Fund. KKR's investments in RBmedia and OverDrive were both shepherded by Richard Sarnoff, a veteran of the publishing industry and Chairman of Media, Entertainment, and Education for KKR. Sarnoff also holds a seat on the board of Cengage, in which KKR is also an investor.

The common ownership of OverDrive and RBmedia raises the question of whether there will be some type of merger between these two companies. If put together either organizationally or via partnerships, RBmedia as the leading competitors for audiobooks and OverDrive with its prowess in e-book lending for libraries would represent a major consolidation in the digital content industry for libraries and related organizations.

This possibility of consolidation remains speculative, especially since the OverDrive deal has not yet closed. It should also be noted that within the library technology industry, Golden Gate Capitol owned both Ex Libris and Infor Library Systems and did not merge the two companies. In this case, the two companies have been acquired through the same investment fund, which at the very least would likely mean common strategic leadership at the board level. 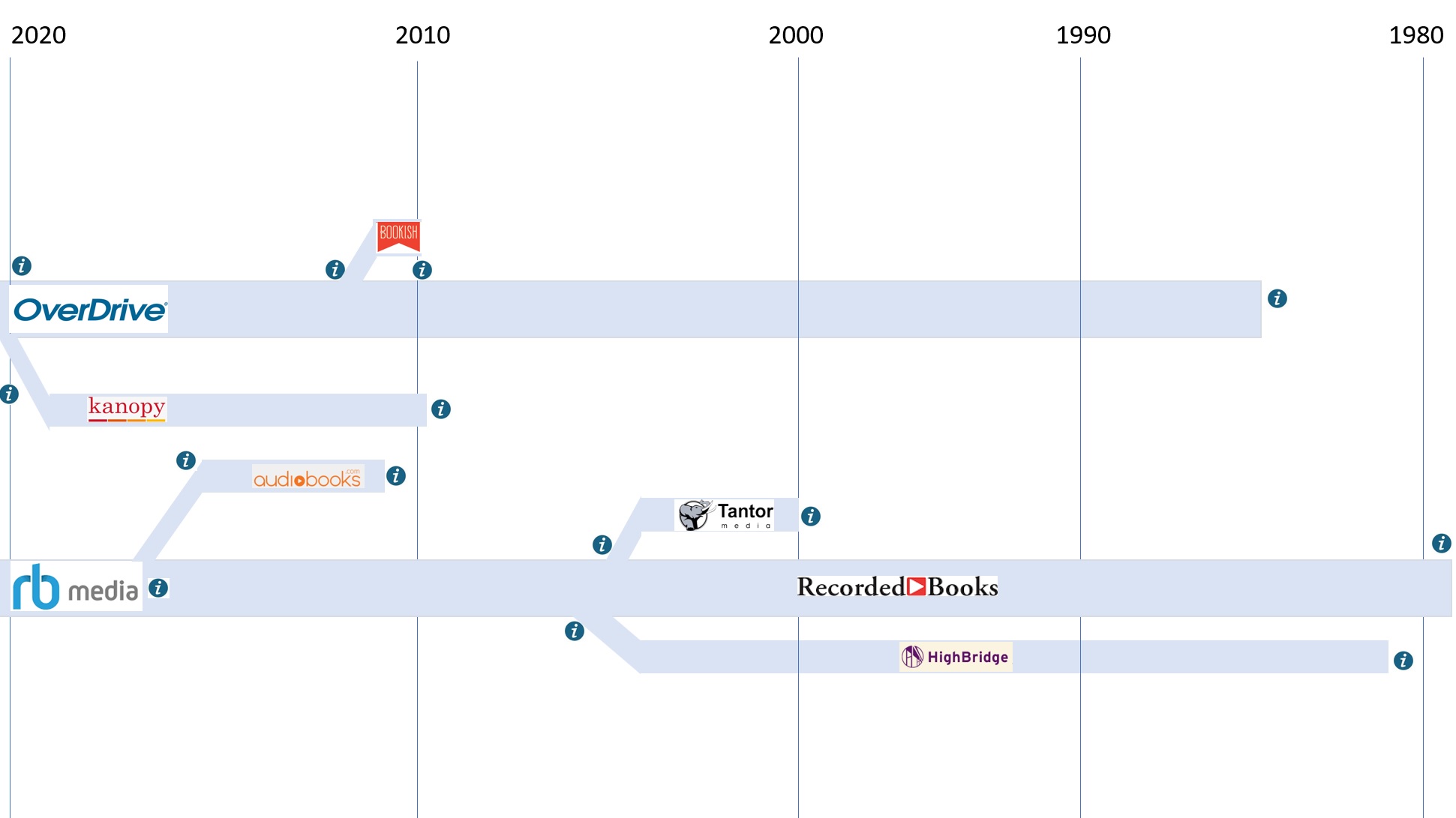 Library Lending in a Field of Giants

E-book lending takes place in the context of a highly consolidated publishing industry dominated by the “Big Five” and Amazon exerting its powerful presence. These corporate forces perceive library lending as intrusive to their commercial interests and are not motivated to offer favorable license terms. Pricing models that place restrictions on the number of circulations allowed before the title must be relicensed and embargos on front-list titles present significant challenges for libraries. OverDrive, with its dominant market share in the library lending arena, could add substantial leverage to library interests in negotiating more favorable pricing and terms.

OverDrive has a strong record of advocating on digital content issues for library interests. The company often takes the brunt of negative perceptions for unfavorable licensing terms available from publishers. In October 2019, for example, OverDrive CEO Potash spoke in front of the UK House of Lords and presented evidence on how libraries make a positive impact on their communities and require more sustainable funding. OverDrive provided funding for the Panorama Project to study “data-informed insights on public libraries and their impact on book discovery, author brand development, and sales.”3

Impact on the Library Community

The holiday announcement of the sale of OverDrive sparked alarm in the library community. Concerns mentioned include the negative impact of private equity ownership and industry consolidation. KKR's involvement with Toys “R” Us and its ultimate demise has been mentioned as an example. While private equity ownership comes with substantial financial overhead, it can also offer important benefits. The failure of a bricks-and-mortar retail chain in the context of massive online competition does not compare to the library digital lending arena in a phase of sustained growth.

It should also be noted that that OverDrive was controlled by private equity prior to its tenure with Rakuten. Private equity firm Insight Venture Partners made a significant investment in Overdrive in October 2010. At that time, two representatives from the investment firm joined OverDrive's board of directors. This ownership arrangement continued through March 2015 when the company was sold to Rakuten.

The possibility of consolidation of the top e-book lending and the leading audiobook distributor seems a more valid concern. The narrowing of providers and the emergence of a new superpower in the industry sounds legitimate alarms. In sectors involving the sale of products and services, fewer competitors can lead to higher prices to consumers. But in a sector where the pricing is controlled more by the publishers than the distributors, a larger-scale player could increase the leverage of library interests in future rounds of negotiating pricing and lending terms with the highly consolidated publishing industry.

The consolidation of an industry can also create opportunities for development and innovation at a level not possible among smaller companies. Especially when matched with new infusions of capital, increased development capacity can produce new products or services beyond the reach of smaller organizations. For libraries, a lot is at stake on whether this new industry dynamic results in better technologies to help them better serve their communities in an era where consumer technologies set an incredibly high bar and strengthen their hand in achieving better pricing and business terms for access to content.

Continuity in leadership also represents an important factor as a company makes ownership and investment transitions. The ongoing involvement of Steve Potash should be seen as a positive note since it strengthens the possibility that the company will continue on a strategic course of growth and expansion rather than follow the often-derided private equity playbook of cutting costs and maximizing profits.

Libraries need to pay attention to how these events unfold. Will the deal close? It is rare for a business transaction to fall apart once it has been announced. This announcement comes after a definitive agreement has been signed, though it can be expected that some financing and other details remain to be completed. Will KKR merge OverDrive and RBmedia? While speculative, it cannot be taken as an accident that the same financial backing and strategic architect is involved in both companies. Synergies may be gained via partnerships or through consolidated corporate structures. Will platform consolidation emerge? Interest in audiobooks continues to rise, possibly faster than e-books.

For libraries, the complexities of implementing separate integrations for e-books via OverDrive and audiobooks via RBmedia could be simplified through a single platform or even through a set of common APIs. A single marketplace for e-books and audiobooks would offer some advantages, offset by concerns with narrowed competition. An interesting future for public library digital lending remains in flux among these multiple possibilities.