The ILS score among the ARLs 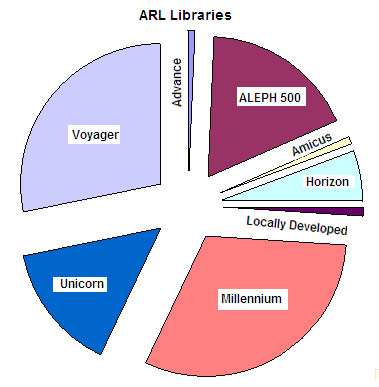 One of the benchmarks that I find helpful to gauge the ILS arena among large academic libraries involves a long-standing chart that I have maintained that tracks the automation systems used among the members of the 123 Association of Research Libraries. These libraries generally represent the largest and best funded in the U.S. and Canada.

Who’s in the lead? Depends on how you count. Innovative’s Millennium stands as the ILS with the most ARL adopters (38). Ex Libris, however, now ranks as the company with the most ARL customers, since they can count both the 35 Voyager sites and the 22 ALEPH 500 sites. If you also include the libraries using other Ex Libris products such as SFX, MetaLib, Verde, and DigiTool, Ex Libris claims over 100 of the ARL’s as their customers.

While the ARLs gravitate to a select group of systems, some follow a less traveled path. The University of California at Berkeley continues to operate the system that they developed locally; the National and Archives of Canada stands as the sole ARL using Amicus, The University of Montreal has announced no plans to migrate from Advance.

The score hasn’t changed in a while. Now that New York University has decided to go with ALPEH 500 following their aborted implementation of Virtua, Ex Libris gains a point. The SirsiDynix announcement to discontinue forward development of Horizon inevitably means some redistribution, over the next 2-3 years. We’ll be watching those libraries to see if they stay with their incumbent company and shift to Unicorn (aka Symphony) or if they gravitate toward other competitors.

So far, none of the ARL’s have selected an open source ILS. Any movement in that direction among this group of libraries will represent a remarkable shift in the library automation arena.

But, then, who's keeping score? I guess I am.