A look at Library automation in Sweden 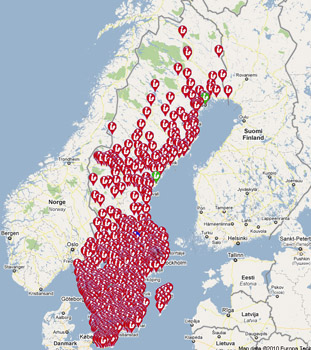 I find it quite interesting to study the patterns in library automation in different parts of the world. I use the lib-web-cats directory of libraries to help me gather and analyze data regarding the automation systems used in libraries. While lib-web-cats still isn’t as comprehensive, I hope to continually expand its international coverage.

For the last few weeks I have been slowly working my way through the public libraries in Sweden. This Nordic country illustrates some trends in library automation that contrast significantly from what we see here in the United States.

Like many European countries, the local governing authority operates a library service and provides a library management system. As I worked through these libraries on the Web, I observed very similar patterns of organization within each site. Even though I don’t read Swedish, I pretty quickly learned the tricks of navigating to the library Web site. (Main page > Kultur och fritid > Bibliotek).

Several trends stand out. It seems that most, if not all, Swedish libraries benefit from the use of modern library automation products. I was not able to find many public libraries without automation. Each municipality or locality operates a library management system or participates in a consortium. I may be missing small libraries in some of the more remote parts of the country, but it seems that standards for library service include automation support. In many cases it seems to be shared with affiliated libraries, often associated with schools in the surrounding communities.

One company, Axiell, dominates the provision of library automation software to Sweden. Axiell Bibliotek AB, a subsidiary of Axiell Library Group, offers two major library management systems to libraries in Sweden, BOOK-IT and Libra.se. Other companies represent a much smaller slice of the Swedish public library arena. Other subsidiaries of Axiell offer automation products to libraries in Denmark, Finland and the United Kingdom.

In addition to the library management systems provided by Axiell, smaller numbers of public libraries in Sweden use Millennium from the North American company Innovative Interfaces, Micromarc from a company based in Norway called Bibliotekenes IT-senter AS, and Pulsens Bibliotekssystem from Pulsen. 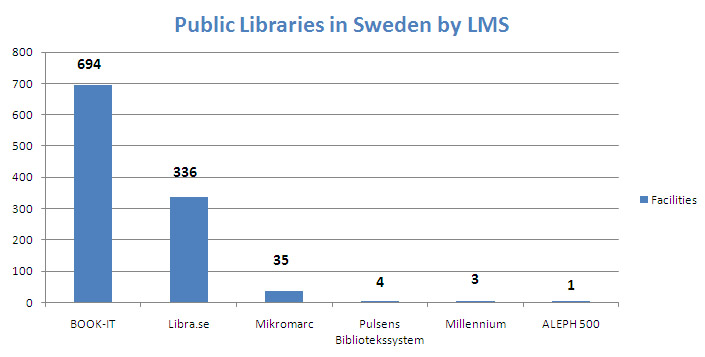 Please let me know of any omissions or corrections. While I have made a what I hope is a comprehensive sweep of public libraries in Sweden, I have not yet gone through the academic libraries systematically.

Developing a comprehensive representation of libraries in a country is quite a time consuming process, and my time is spread very thin. Help is always appreciated in adding new libraries to lib-web-cats or updating details about technology products used. 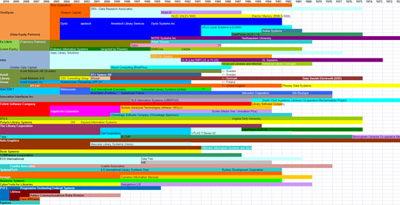 A few years ago, I developed a graphic that illustrates the history of the library automation industry, showing the various mergers and acquisitions that have taken place over the years. I've now posted an updated version of the graphic that brings it up to date and adds a few new companies.

To create this graphic, I use a spreadsheet to create colored cells that represent the lifetime of each company, including the year it was established and when it was absorbed into another company through many of the business acquisitions that have taken place. While the graphic looks pretty simple, it boils down lots of data into a visual that describes the complex business history in a glance.

The transition from fragmentation to consolidation stands out as the main theme illustrated by the graphic. In earlier years, a larger number of smaller companies competed within a limited economy, that is the universe of libraries acquiring and maintaining library management products. In many cases, companies that originally served a specific country or region have been absorbed into companies with international scope. Many of the survivors of the industry that we see today include very large consolidated companies addressing libraries in many regions worldwide.

One of the companies that I added in this revision of the graphic is Axiell Library Group. This company is not well known in North America since it serves primarily libraries in the Nordic Region in Sweden, Denmark, and Finland. The 2007 acquisition of DS brought the United Kingdom into its reach. This company has come to its current state through a long sequence of mergers and business transitions. Since I don't read the languages involved, it's been difficult for me to work through the details; any help from readers in that region to confirm or correct the details would be greatly appreciated.

I do expect that the map will continue to change over the next few years. We can certainly expect changes in ownership in one or more of the companies held by private equity firms. These investments, many of which were made in 2006 when private equity discovered the library automation industry, were not necessarily made to gain permanent ownership. The timings will vary, but one can expect exit strategies that will result in new ownership and possible new combinations of the companies involved.

Thanks for this! I used this chart (explaining that it was always in a state of flux) in teaching my IST 667 Information Technology for Libraries and Information Centers course at Syracuse University. I appreciate the update!