2009 in review from Smart Libraries Newsletter, Part one

As a contributing editor to Smart Libraries Newsletter published by ALA TechSource, I write one or more short articles each month on developments in the field of library automation. This publication, known from 1981-2000 as Library Systems Newsletter, has chronicled the events in the field since July 1981. I’ve had the privilege to contribute since 2005. My agreement with ALA allows me to post what I write for them on my Web site after a specified embargo period. For 2009 it was 3 months, beginning in 2010 it will be 6 months. I believe this is a fair arrangement that helps sustain TechSource, but that provides open access within a reasonable period. To get access to SLN articles as they are published, consider subscribing.

The following are the articles that I wrote for Smart Libraries Newsletter in the first half of 2009. I’ll post the second half soon.

Infor Library and Information Solutions launched the general release of V-smart in November 2008. V-smart is a new, fully Web-based integrated library system. This product continues the evolution of the Vubis library automation system, advancing the product from the client/server architecture into the realm of Web-based computing, the preferred technology approach in the current technology environment. This release follows the testing and early adoption of the software in two French libraries, Sainte-Geneviève University and La Cité Internationale Universitaire de Paris. Infor indicates that at least ten additional libraries are preparing to move to V-smart.

In keeping with the ever-present themes of Web 2.0 and social computing, Inmagic has launched a new version of Presto that fully embraces these concepts and casts a new approach to knowledge management, which it terms Social Knowledge Networks. Initially announced at the Special Library Association Annual Conference in June 2008 and released in late 2008, Version 3 of Inmagic’s Presto product has been enhanced with a number offeatures that enable the organization to enhance and extend its knowledge assets through controlled use of social networking technologies and concepts. Though the growth of new features in the product extends only incrementally beyond previous versions, the shift toward Social Knowledge Networks represents a new strategic focus of the company and itsapproach to knowledge management.

Serials Solutions announced a new discovery service called Summon that aims to provide a unified search tool for library users. The goal of this tool is to provide access to all of a library’s content, print and electronic, through a single search box. At the heart of summon lies a very large index of content that the company is building from a variety of sources. This index includes the full text of a large body of articles provided by many different publishers as well as open access content. Summon aims toexpand its index to include all of the content represented in a library’s collection of subscriptions, its local print holdings and other resources.

LibLime, a company that bases its business on providing services for open source software, has launched a new project called biblios.net. Biblios.net is a new cataloging tool for libraries with access to a large pool of MARC records. The service consists of two components: biblios, a Web-based cataloging interface and biblios.net, the repository of MARC records.

In addition to Discovery products created by commercial companies, a number of alternatives have emerged in the open source arena. These open source products allow libraries to follow a more experimental approach in establishing their nextgeneration discovery interface strategy. Libraries can download and install the software on a test server, load sample data sets, and customize it without the need to make a major commitment or financial outlay. They can even experiment with multiple products. Theavailability of these open source products allows a library to make an initial investigation of a new generation interface and gain hands-on experience, even if they might eventually decide to purchase a commercial product. In the open source discovery interface arena, VUfind stands as the dominant product. The Mellon-funded eXtensible Catalog project has been underway for about 2 years and will soon be releasing software. Other open source discovery technologies emerging include the University of Virginia’s Blacklight and OpenBib, which is an example of discovery interfaces developed internationally.

May 2009: OCLC Partners with EBSCO to Expand Access to Articles in WorldCat Local

In the world of next-generation discovery interfaces, competitors battle to deliver more and more content through a single search box. OCLC positions WorldCat Local as a next generation library interface, using its massive WorldCat database to provide a novel model of access to library collections rather than Web-based online catalogs tied to the contents of a single library or consortium. WorldCat Local embodies the approach of presenting users with the ability to search against an expansive universe of resources, sorting results so that items available locally appear more prominently than those from more distant locations. This model allows library users to easily discover materials even when they are not held by their local library, with a built-in streamlined approach for requesting materials held in other libraries.

Ex Libris has developed a new service called the bX Recommender that takes advantage of social data to determine related works for any given article. This approach brings Web 2.0 concepts to the realm of scholarly content to provide a new and innovative service. The bX Recommender service mines a vast repository of data from link resolvers across multiple institutions. With link servers mediating the process of connecting users to scholarly content, an interesting opportunity emerges to gather user data and apply it to value-added services. In the same way that search engines rely on social data to determine relevancy for Web-based resources, Ex Libris has devised a service that relies on the user data from link resolvers. Many libraries make use of link resolvers to provide access to the ever-increasing body of articles that are represented in their collections of e-journals. 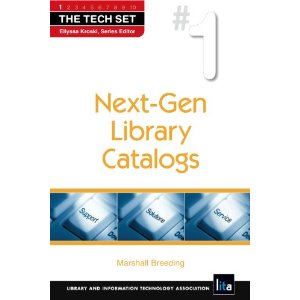 Today marks the publication date of my latest book, Next-Gen Library Catalogs co-published by Neal Schuman Publishers, Inc. and the Library and Information Technology Association (LITA). It’s part of The Tech Set, a series of 10 books each intended as a basic primer for one of the new technologies affecting libraries. In Next-Gen Library Catalogs, I aim to guide readers through this important new genre of interfaces that libraries can adopt to modernize the way that they present their collections and services to their users. The online catalogs delivered as modules of integrated library systems don’t necessarily stand up as the best way to explore library collections since they often lead users only to the print inventory and neglect our ever expanding collections of digital content. In a time when our users are acclimated to simple-to-use yet powerful search platforms such as Google and Amazon.com, libraries should not be content to offer arcane online catalogs and a menu of other silos of content. Instead, many libraries now want to offer a more elegant, comprehensive interface that helps our users to discover the full breadth of library collections.

Consistent with the theme of The Tech Set, this book not only introduces the concept of Next-Gen Library Catalogs, but it gives practical information on the products available, their distinguishing characteristics, recent trends in the evolution of the genre, and some of the processes involved in selecting, implementing, supporting and marketing it in your library.

In this fast-moving genre of technology, I’ve done my best to provide a view of the current state of the art and some indication of the direction of the trends. I’m delighted to be able to share the information on this aspect of library technology that I find so interesting and vitally important through this book. Thanks to Elyssa Kroski the Tech Set editor and to Neal-Schuman for providing the opportunity.