lib-web-cats now has the ability to display maps with multiple library locations that can be generated internally, or through links embedded in external pages. This map facility is based on the Google Map API Version 3 and geographic coordinates stored in library records in lib-web-cats. These coordinates have been pre-populated for libraries in the United States using the Google API or the USGS geocoder Web service. I’m still in the process of adding coordinates for other libraries. 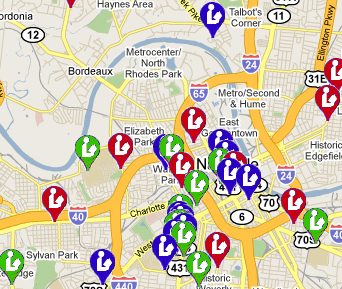 lib-web-cats has had the ability to display maps for individual libraries for quite some time. The display of each library automatically presents a map of the library location if the coordinates of the library have been recorded. For those without coordinates, a button is presented that launches a pop-up window that attempts to display a map based on a dynamic calculation of the geographic coordinates from its street address.

Creating and Linking to Maps

Libraries that would like to present a map of the libraries in their system or in their geographic area can link to these maps and avoid some of the complexities of generating maps on their own sites.

One way to use the map is through the lib-web-cats pages for your library. Each map presented through lib-web-cats includes a permalink at the bottom that is a persistent URL that can be used to link to the map. Do not just copy the link from what shows in your browser since it might contain extraneous session information.

For libraries in the United States, lib-web-cats can reliably generate maps for every city and county in every state, as well as most library consortia. lib-web-cats will present links to display these maps in library listings. Look for the map symbol:

which links to the appropriate map.

You can also create a map by manually constructing the URL that you want to put on your page. Such a URL includes the base URL for Library Technology Guides (http://www.librarytechnology.org/), the map script (map.pl), a question mark (?),and one or more sets of name/value pairs that represent the query that will return the list of libraries you want. Query term supported include: Country, State, County, City, Institution, OrgName, Consortia, Type, ILS, and AltOPAC (discovery interface). Each set of name/value pairs should be separated by the UTF-8 representation of the amberstand (&amp;). Example: http://www.librarytechnology.org/map.pl?State=Massachusetts&Type=Public&ILS=Unicorn. To qualify members of the Association of Research Libraries use ARL=on, Members of the Urban Libraries Council ULS=on, libraries offering public wireless access WiFi=on. If you have any questions on how to construct the link to display the map you want, just ask me.

Limitations.The placement of libraries on the maps depend on accurate coordinate data. lib-web-cats may have missing or inaccurate data for some libraries. If you find that libraries do not display or display in an incorrect location, you will need to update the entry for that library accordingly. Registered users of Library Technology Guides can log in and update entries (all changes are logged and monitored). An easy way to determine the coordinates of a library is to find the library in Google Maps, zoom in to the maximum level, center the map on your library, and then copy the url associated with the "link" option in the upper right corner. Paste this URL into notepad or some other editing space. The "ll" parameter of this url gives the decimal representation of the longitude and latitude of the library, which can then be pasted into the lib-web-cats record. You can also use any GPS device to capture the coordinates. lib-web-cats can accept coordinates given in degrees, which are automatically converted into decimal.

Maps of library locations on a campus may be of particular interest. Currently many of the academic libraries lack accurate coordinates. But using the methods described above, you should be able to easily create an accurate map that displays all the campus library locations.

The lib-web-cats map facility combines data from its own database, the Google Map API, and performs a variety of calculations to display each map. The display of a map using the Google API requires several different data elements, including the coordinates on which the map should be centered, the zoom level that should be applied, the coordinates of each pin location, and information to populate the descriptive pop-up window. The perl script that generates the map initially runs the query for the libraries requested for display and retrieves the geographic coordinates. It identifies the minimum and maximum values for each latitude and longitude. The mid-point between the minimum and maximum values are passed to the map API as the center position of the map. The script calculates the difference between the minimum and maximum levels, and uses the scale of the difference to assign a zoom level. With the center point and zoom values, the basic map can be requested from the Google API. Next, the script fetches values for each library, including its coordinates, name, address, and photo. These data are used to place the pin, and populate the informational window.

The presentation of each map involves a fairly large number of database transactions and calculations, but for most maps the load time is quick. Maps that involve several hundreds of libraries will take a bit longer to load. I've currently set the maximum number of libraries per map at 2,000.

I hope that those that use lib-web-cats will find the new mapping feature to be helpful. Feel free to link to any of the maps. And please send my any suggestions that you might have on ways to make it more useful and interesting. If you run into errors, or if you find libraries with incorrect coordinates, please report those to me.

I have posted the results the third annual survey of data collected on how libraries rate their current integrated library system, the company involved, and the quality of customer support. The survey also aims to gather data regarding attitudes regarding interest levels in open source ILS products. Perceptions 2009: an international survey of library automation gives the general conclusions and presents all the statistical results derived from the survey. As usual, some of the most interesting and valuable information lies in the comments offered by responders.

Here is a sample table from the report:

Statistics related to the question: How satisfied is the library with your current Integrated Library System (ILS)?


Just as I did for the previous editions survey, I created an interactive tool for viewing the statistical summaries and comments. The main tables in the article show statistics only for those products that had more than 20 survey responses. You can use the ILS Product Report to view the statistics on any of the products mentioned in the survey and to read the comments about that system, even if the number of responses did not meet the threshold. The comments that display have been edited to remove any text that identifies the individual or institution, preserving the anonymity of the responders. The narrative data in the comments largely corroborate the statistical responses and makes for interesting reading.

I have made a minor adjustment to Library Technology Guides to limit the advanced search of lib-web-cats to those who register and login to the site. No costs apply to membership. I hope that this approach will lead to a higher level of user engagement on the site and make it more possible to deploy features in the future of specific interest to those with interest in library technology topics. The basic search page and the entries for the libraries, by far the most popular features of the site, will remain open to non-members. Please let me know if you have any questions or concerns regarding this new procedure.

Marshall, I certainly hope that you succeed in generating a higher level of user engagement.

I recently read Rose Holley's PRDLA keynote "Crowdsourcing and Social Engagement: Potential, Power and Freedom for Libraries and Users"[1] which has some useful advice on user engangement. Perhaps having a dynamic list of recent additions/updates and of top user contributors could help open up what's going on and encourge people to start, and then continue, engaging and contributing.

There are two things that bug me that would help the user experience (and so hopefully user engagement). One is that when you log in you aren't taken back to the page you were on originally - sometimes the back button solves this, but sometimes it's a bit of a hassle to renavigate to whatever page it was. The other is that it seems like you get signed out quite frequently. Whether it's just a short session timeout, or conflicts with concurrent sessions (or both), it's a little frustrating to have to sign in so often.

Thanks for the feedback. I have increased the time-out value from two hours to six. It would definitely be nice for it to bring you back to the original page once you log in. I'll see what I can do about implementing that feature.